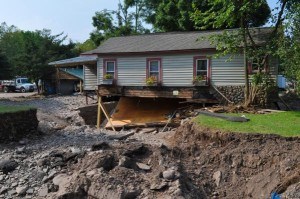 An insurance industry service that tracks catastrophe losses has sharply raised its estimates for August’s Hurricane Irene, projecting insured property damage of $4.3 billion from the first hurricane to hit the United States in three years.

Property Claim Services, which bases its estimates on confidential insurer surveys and its own database of houses across the country, raised its estimate by nearly 18 percent from its previous report in late September.

The estimates do not include uninsured property, nor do they include flood damage that is insured by the National Flood Insurance Program. In some states, like Vermont, flood losses were more severe than other kinds of damage.

PCS released its report late Tuesday night and said it would publish a revision in two months.