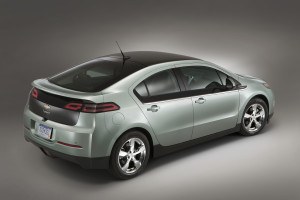 The government is investigating new fires involving the lithium-ion batteries in General Motors Co.’s Chevrolet Volt to assess the fire risk in the electric car after a serious crash.

GM, which was informed of the investigation on Friday, said in a statement that the Volt “is safe and does not present undue risk as part of normal operation or immediately after a severe crash.”

The latest fires are in addition to a battery fire in a crash-tested Volt six months ago.

NHTSA learned of a possible fire risk involving damaged Volt batteries when a fire erupted in a Volt that was being stored in a parking lot of a test facility in Burlington, Wis. The fire was severe enough to cause several other vehicles parked nearby to catch fire as well.

The car had been subjected to a side-impact crash test more than three weeks earlier, on May 12, during which the battery was punctured and its coolant line ruptured.

Last week’s tests of three battery packs were designed to replicate the May test. In that test, the Volt was subjected to a simulated side-impact collision into a narrow object like a tree or pole followed by a rollover, the agency said.

The first battery tested last week didn’t catch fire. But a battery test on Nov. 17 initially experienced a temporary temperature increase, and on Thursday caught fire while being monitored. Another battery tested on Nov. 18, which was rotated 180 degrees within hours after the test, began to smoke and emit sparks shortly after the rotation.

The tests were conducted by NHTSA and the Energy and Defense departments at a defense facility near Hampton Roads, Va.

So far, no fires have been reported in Volts involved in roadway crashes, NHTSA said. More than 5,000 of the vehicles have been sold.

It’s too soon to tell whether the investigation will lead to a recall of any vehicles or parts, but the government will ensure consumers are informed promptly if that occurs, the agency said.

With its OnStar safety communications systems a part of the car, “GM knows real time about any crash significant enough to potentially compromise battery integrity,” the automaker said. “Since July, GM has implemented a post-crash protocol that includes the depowering of the battery after a severe crash, returning the battery to a safe and low-powered state.”

Electric vehicles are critical to President Barack Obama’s plans to reduce U.S. dependence on foreign oil. He has called for putting 1 million of the vehicles on the road by 2015.

The Volt and Nissan’s Leaf, with more than 8,000 cars on the road in the U.S., are among the first mass-marketed plug-in electric cars. They went on sale in the 2011 model year. Other automakers are also working on electric vehicles.

Safety testing hasn’t raised concerns about electric vehicles other than the Volt, NHTSA said. But the agency is asking manufacturers who have electric cars on the market, or who plan to introduce electric vehicles in the near future, for more detailed information on their battery testing as well as what procedures they have established for discharging and handling batteries, including recommendations for reducing fire risks.

“NHTSA continues to believe that electric vehicles have incredible potential to save consumers money at the pump, help protect the environment, create jobs and strengthen national security by reducing our dependence on oil,” the agency said.

After the first battery fire, GM officials complained that NHTSA did not drain the battery of energy as called for under the automaker’s crash procedures. NHTSA normally drains fuel from gasoline-powered cars after crash tests, they said.

Lithium-ion batteries, which are rechargeable, have been the subject of several recalls of consumer electronics. Millions of laptop batteries made by Sony Corp. for Apple Inc., Dell Inc., Lenovo Group Ltd. and other PC makers were recalled in 2006 and 2007 after it was discovered that they could overheat and ignite.

The Federal Aviation Administration issued a warning to airlines about the potential for fires in cargo containing lithium-ion and non-rechargeable lithium metal batteries after a United Parcel Service plane crashed near Dubai last year, killing both pilots. The plane, which was on fire, was carrying thousands of lithium batteries.

GM and NHTSA have pointed out that cars with gasoline-powered engines are susceptible to fires after a crash.

In the event of a crash, NHTSA’s advice to consumers is to do the same thing they would do in a gasoline-powered car – get out of the vehicle and move a safe distance away. The agency also recommends against storing a severely damaged electric car in a garage or near other vehicles.