Federal safety regulators have upgraded and widened an investigation into Saturn Aura cars over a transmission shift cable that could fail and cause the park gear not to fully engage.

The National Highway Traffic Safety Administration said it was upgrading its probe to an engineering analysis from a preliminary evaluation into General Motors Co cars to evaluate the frequency of shift cable failure, the consequences and the scope of vehicles that may be affected. 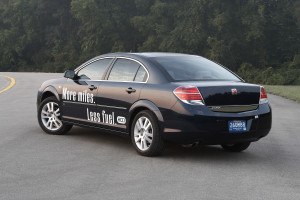 The Saturn brand was discontinued by GM in 2009.

The consumer complaints NHTSA has received allege the transmission shift cable had failed, causing the vehicle to roll away, move or accelerate with the shifter in park, or to accelerate in the opposite direction than the driver intended.

The probe also was widened from 2007 model-year Auras to include 2008 models, raising the potential affected total by more than a third to 88,729 cars from when the probe was first opened in May.

A GM spokesman said the U.S. automaker is cooperating with NHTSA officials.

An engineering analysis is the second step in a process that could lead to a recall if regulators determine that a safety issue needs to be addressed by a manufacturer.

NHTSA said it had received 23 complaints and GM another 111 — although some of those were duplicates — including seven reports of crashes and one injury. The agency said the consumer complaints it received covered model years 2007 and 2008, while those GM received covered 2007 models only.

GM said the problem mostly affects cars equipped with four-speed transmissions and similar cable installations are used in other GM vehicles from model years 2004 to 2008, according to NHTSA.

In the injury incident reported to GM, the driver reportedly placed the shifter in park, exited the vehicle and was struck when the vehicle unexpectedly rolled backward, according to NHTSA.

In the crash incident reported to NHTSA, the driver reportedly placed the gear shift selector into park but the transmission remained in drive causing the vehicle to unexpectedly move forward and strike a building, NHTSA said.

In a crash incident reported to GM, the driver placed the shifter in park but the transmission remained in reverse, according to NHTSA. When the driver exited with the engine running, the vehicle continued in reverse and struck a building.

The initial investigation was opened in May into 2007 model year Auras, potentially affecting 65,105 cars. At the time, NHTSA said it had received eight complaints.

(Reporting by Ben Klayman in Detroit, editing by Dave Zimmerman)