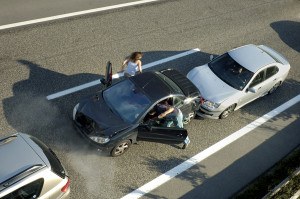 An approach that can give clarity to the issue of causation or aggravation of symptoms due to a low speed motor vehicle collision is the calculation of a numerical value for the forces experienced by the claimant in the collision.

This numerical value of forces can then be compared to the forces experienced in activities of daily living engaged in by the claimant. This will convert a situation dependent upon medical opinions based upon subjective complaints into objective numbers that can be used in a fact based analysis.

The ability to calculate the forces in a motor vehicle collision and determine if the forces were sufficient to have caused the claimed injury is a rare skill which calls upon a specialized combination of medical and engineering expertise. Few physicians or surgeons have the training necessary to calculate such forces. When such skill is available, however, it can move determinations of causation or aggravation from the subjective to the objective realm.

The first step is for the expert is to determine the likely speed of collision between the two vehicles. This is based upon a review of the photographs of the vehicles after the impact. A skilled expert will have an ability to estimate the speed of collision based upon the damage to the vehicles. This is derived from observing many images of various vehicles in metered crashes.

In addition, the Federal Motor Vehicle Safety Standard mandates that automobiles be able to sustain a 2.5 mile per hour collision with only minor damage to the bumper.

Once an estimate of speed of the collision is obtained, the expert may then calculate the forces of collision using information about the mass of the vehicles. Calculation of force in pounds-force and G force are possible.

In the case of rear-end automobile collisions with little or no damage to the bumpers of the vehicles; the forces exerted upon the spine of an occupant of the rear-ended vehicle are usually less than 6 pounds-force. Studies on spines from cadavers have shown that on average it requires 1,225 pounds-force to cause a ruptured intervertebral disc. Consequently, most low speed automobile collisions only generate less than one percent of the force necessary to cause a disc herniation. This highlights in an objective manner the lack of causal connection between many low speed automobile collisions and spinal injury claims.

In addition, G force may also be calculated. One G is the force of gravity on earth. In low speed automobile collisions where there is only minor damage to the vehicles, the G forces are usually less than 3 Gs. This can be put into context by comparing the calculated G forces of the collision with the G forces generated in activities of daily living. For example, plopping down into a chair or into an automobile seat generates over 5 Gs of force. Consequently, the forces of most low speed collisions are less than the forces experienced by the claimant when they entered into their vehicle prior to the collision. This is an important point when determining whether or not a claimant’s condition was caused by or aggravated by a low speed collision.

It should be noted that some courts will not allow a non-physician biomedical/biomechanical engineer to testify as to whether or not a low speed motor vehicle collision caused or aggravated the claimant’s condition. The court’s reasoning is that in order for the expert to give an opinion as to whether or not an injury was caused by or aggravated by a collision; the expert must be able to give both a medical and an engineering opinion. A non-physician cannot give a medical opinion since they cannot give the combination medical and engineering opinion required for testimony to be admissible.

Many times a treating physician or surgeon will support the claim by citing the subjective history given by the claimant that they either had no symptoms before the collision or that their symptoms became worse after the motor vehicle collision. This is an assertion that is based upon flawed logic. The logical fallacy demonstrated by this line of reasoning is so well known and so ancient that it has a Latin name. It is the post hoc ergo propter hoc fallacy which means “after this, therefore because of this.” This fallacy assumes that if B follows A; then A is the cause of B. That is, if the person did not complain of neck or back pain until after the automobile collision, then the automobile collision is the cause of the back or neck pain. This is incorrect logic since other factors may be the cause of the pain complaints after the accident, such as other activities or motivations. Objective force calculations help to demonstrate the error of logic used by many physicians and surgeons engaged in the post hoc ergo propter hoc fallacy.

In summary, use of force calculations when performed by physician-biomedical/ biomechanical engineers can provide an objective means to determine causation or aggravation of injury in low speed motor vehicle collisions. This can bring an objective measure of truth to situations that have been traditionally determined by opinion based upon subjective complaints.

Ernest P. Chiodo, M.D., J.D., M.P.H., M.S., C.I.H. is a physician, attorney and a biomedical/biomechanical engineer. Dr. Chiodo has served as the medical director of the City of the Detroit. He is an assistant clinical professor of internal medicine, family medicine, and public health at Wayne State University School of Medicine. He is also an adjunct professor of law at John Marshall Law School and Loyola University Law School. Dr. Chiodo has offices in Detroit and Chicago.