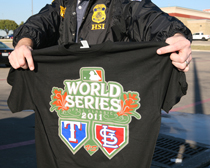 The one-month operation, which commenced at the beginning of the American League and National League Championship Series, resulted in the seizure of 58 commercial websites that sold and distributed counterfeit sports paraphernalia. Special agents have also seized 5,347 items with a manufacturer’s suggested retail price (MSRP) of $134,862.

The 58 domain names seized were all commercial websites engaged in illegally selling and distributing counterfeit sports paraphernalia. During the course of the operation, federal law enforcement agents made undercover purchases of sport jerseys from online retailers suspected of selling counterfeit goods.

In most instances, the counterfeit goods were shipped directly into the United States from suppliers in other countries using international express mail.

The seized counterfeit items infringed on the copyrights or trademarks owned by: Major League Baseball, the National Basketball Association, the National Football League and the National Hockey League.