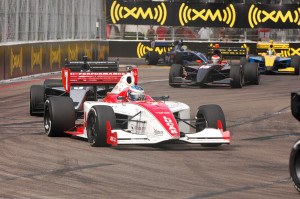 More than a dozen IndyCar drivers met for three hours with series CEO Randy Bernard and Brian Barnhart, the series’ president of competition, about preventing another fatal accident.

The meeting came eight days after two-time Indianapolis 500 winner Dan Wheldon was killed in a fiery, 15-car crash in the season finale at Las Vegas and less than 48 hours after he was buried in his adopted hometown of St. Petersburg, Florida.

“How we react to this is critical, and we’re very encouraged with what happened today in terms of ideas,” four-time IndyCar champ Dario Franchitti said. “Finger-pointing is not going to do any good at all, and we’re all unified going forward in one direction.”

Although those inside the meeting room declined to share specifics, the discussion was expected to cover everything from tracks used by the series to new Plexiglas catch fences to putting canopies over the drivers’ open cockpits.

IndyCar does have time to consider potential changes because it won’t race again for six months.

“We’re not going to make motor racing 100 percent safe, that’s a fact,” Tony Kanaan said. “But there are things that we can do, hopefully, to make it better, make it safer.”

IndyCar already planned on a new car for next season. Wheldon, who was the primary test driver for the new model, repeatedly told reporters it was significantly safer.

But drivers want other assurances, too.

“We have to take it to the next level of safety,” said Davey Hamilton, who sustained severe foot and ankle injuries in a serious crash in 2001 at Texas. “One thing I’ve seen in Dario, Tony and Justin (Wilson) is that they’ve unified us. I think they’re doing it in a very positive way. It’s about what’s best for the series and what’s best for the drivers.”

Franchitti and Kanaan, two of Wheldon’s closest friends, were in town for his memorial Sunday, then stayed to participate in the drivers meeting.

“I feel responsible for all the drivers here,” Franchitti said. “Everything is on the table, and I think today was a very productive discussion.”

Whether it was radiation issues at the series’ final Japan race, a botched restart on a wet New Hampshire track, inconsistent penalty calls or a series of pit road tangles, drivers and team officials repeatedly voiced concerns.

The first complaints emerged in January when Bernard announced the series would use double-file restarts, a staple on the Cup circuit for several years.

IndyCar drivers, some of whom had Cup experience, contended it couldn’t work in a series where bump-and-run tactics create a dangerous racing environment. But after some early wrecks, drivers and series officials figured it out.