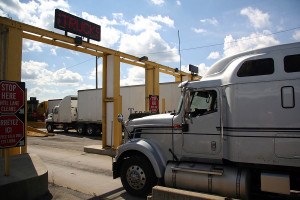 Business leaders on both sides of the Rio Grande praised the move while sign-waving Teamsters Union members in Laredo jeered.

NAFTA called for Mexican trucks to be allowed to travel beyond a six- to 25-mile wide “commercial zone” in the United States by December 1995.

However, concerns about the safety of Mexican trucks, the opposition of the Teamsters and other labor unions, and, in recent years, heightened concerns about Mexico’s violent drug war and illegal immigration, have repeatedly delayed the provision from taking effect.

Canadian-based trucks have had free access to U.S. highways since 1982.

An hour before the truck left the Nuevo Laredo departure point for Garland, Texas, Mexico lifted punitive tariffs it had imposed on dozens of imports from the United States in 2009 in response to the U.S. failure to implement the cross-border trucking provision, a move the National Organization of Manufacturers said cost the loss of 25,000 U.S. jobs.

U.S. pork and dairy producers — whose products were among those affected by the Mexican tariffs — said Friday’s action will be a major boost to their industries.

But James Hoffa, president of the International Brotherhood of Teamsters, criticized the move.

“Mexico does not meet our safety standards and a violent drug war is raging there, which the Mexican government is powerless to control,” Hoffa said in a statement. “The Teamsters’ fight to keep our roads safe will continue, and we fully expect Congress to take action.”

A bipartisan congressional group — 13 Republicans and 31 Democrats — is working to keep Mexican trucks off U.S. highways.

They say Mexican trucks are unsafe, Mexican drivers are not trained to the same standards as U.S. truckers, and opening the U.S. border to Mexican trucks will “create a security breach along out southern border,” according to a letter the group wrote to Secretary of Transportation Ray LaHood in May.

The agreement that led to Friday’s action calls for Mexican truck emissions to meet U.S. clean air standards and for Mexican trucking companies and drivers to submit to U.S. security checks.

It also says Mexican truck drivers must meet U.S. highway safety standards and demonstrate competency in English, to show they can read road signs and communicate with police.

In addition, Mexican trucks will be required to purchase U.S. insurance.