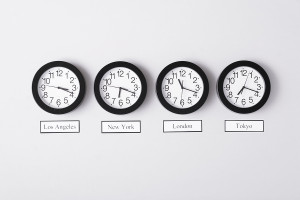 The organization in charge of the Internet’s address system is taking over a database widely used by computers and websites to keep track of time zones around the world.

The transition to the Internet Corporation for Assigned Names and Numbers, or ICANN, comes a week after the database was abruptly removed from a U.S. government server because of a federal lawsuit claiming copyright infringement.

Without this database and others like it, computers would display Greenwich Mean Time, or the time in London when it isn’t on summer time. People would have to manually calculate local time when they schedule meetings or book flights.

The Time Zone Database allows people to set clocks simply by choosing a city. Select New York, for example, and the computer will know that it is normally five hours behind London, but four hours during a brief period when the U.S. is still on summer time and Britain is not.

The database is updated more than a dozen times a year and is used by a range of computer operating systems including Apple Inc.’s Mac OS X, Oracle Corp., Unix and Linux, but not Microsoft Corp.’s Windows.

It’s also used by several websites that tell people what the current time is around the world, or what time it will be in Sydney or Moscow next Tuesday at 8 p.m. in Los Angeles. Some non-Internet functions, such as calendar software, also incorporate the database.

Although those functions continued to work after the database disappeared from the government’s server, computer systems couldn’t get updates to reflect changes in time zones and in the duration of summer time.

Kim Davies, a technical manager at ICANN, said that because much of the Internet depends on the database, its management by ICANN is consistent with the organization’s mission to maintain a stable Internet.

One of ICANN’s main functions is to coordinate Internet domain names – the suffixes such as “.com” and “.org” in Internet addresses. Those are key for allowing computers to find websites and route email.

ICANN has been in discussions for months about taking over the database with the impending retirement of its longtime coordinator. Arthur David Olson, an employee of the National Institutes of Health who volunteered as coordinator as a side project, began looking for a new home for the database in 2009.

ICANN accelerated those discussions and took over management Friday after the database was removed from NIH’s server on Oct. 6, following a lawsuit over historical data used.

Astrology software company Astrolabe Inc. argues that Olson and another volunteer at University of California, Los Angeles should have paid royalties for including data from its software. The defendants have insisted that the data are in the public domain and not subject to copyright. Their employers were not named as defendants.

The federal lawsuit, filed Sept. 30 in Boston, does not affect current time zone information, which comes from tips sent by volunteers through an email list.

However, ICANN is keeping the historical information in the database.

“We are aware of the lawsuit,” Davies said. “We believe it’s important to continue the operation of the database. We’ll deal with any legal matters as they arise.”