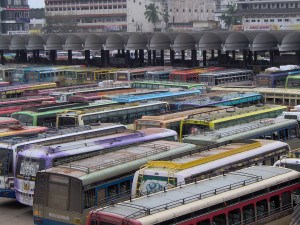 Federal, state and local police began conducting thousands of surprise safety inspections of motorcoaches, tour buses, school buses and other passenger vehicles across the country as part of a nationwide Passenger Carrier Strike Force. The two-week inspection sweep will continue through October 7, 2011.

The inspection sweep was announced at The Motorcoach Safety Summit, sponsored by the US Department of Transportation’s Federal Motor Carrier Safety Administration (FMCSA), builds on the DOT’s ongoing efforts to strengthen motorcoach safety.

Over the past five years, FMCSA has doubled the number of bus inspections and comprehensive safety reviews of the nation’s estimated 4,000 passenger bus companies.

To ensure passenger carriers operating in violation of DOT regulations are punished, DOT has asked Congress to raise the penalty for operating illegally or without authority from $2,000 a day to $25,000 per violation.