The United States heaped the lion’s share of blame for the country’s biggest ever offshore oil spill on BP Wednesday as the government issued its final assessment of last year’s Gulf disaster. 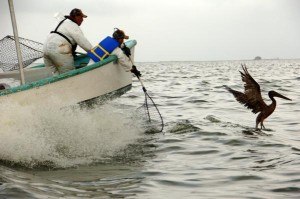 In a report that may be pivotal in the multibillion-dollar legal battles to come and could set the stage for criminal charges, the Coast Guard and the offshore oil regulator said BP was solely to blame for 21 of 35 contributing causes to the Macondo well blow-out that led to the leak, and shared blame for eight more.

After the most definitive look yet at the disaster, investigators said BP focused excessively on containing costs and speeding up operations, and made a series of decisions that complicated cementing operations, which they said were the central cause of the disaster.

While the findings were broadly in line with several previous investigations, this report offered the most comprehensive glimpse into the government’s official view on the causes of the Gulf oil spill, including analysis of the recovered blowout preventer and violations of federal regulations by the companies involved with the well.

“BP’s cost or time saving decisions without considering contingencies and mitigation were contributing causes of the Macondo blowout,” the report said.

The report held no major surprises, said David Pursell, an analyst with energy investment bank Tudor Pickering Holt & Co. in Houston, but it “very much points a finger at BP more clearly than I would have expected.”

“What they’re saying is, it’s BP’s well. Transocean may have made some mistakes, but part of that was because BP didn’t tell them or communicate to them about increasing operational risks. BP is the operator of the well, it’s their responsibility,” Pursell said.

Investors will now turn their attention to the courts, where numerous cases pitting the companies against each other, the public and the government could drag out for years.

Each company involved found some reason for validation in the report.

Transocean said the report “finally puts to rest all previous allegations that improper maintenance of the blowout preventer contributed to the tragedy”.

Halliburton said the report “accurately places responsibility on BP”, which it said was responsible for all the operational decisions in the contributing causes.

BP said it agreed “with the report’s core conclusion — consistent with every other official investigation — that the Deepwater Horizon accident was the result of multiple causes, involving multiple parties, including Transocean and Halliburton”.

The report highlighted a litany of errors that preceded last year’s explosion on the BP-leased Deepwater Horizon rig that killed 11 workers and spewed more than 4 million barrels of oil from the Macondo well into the sea.

BP failed to communicate decisions regarding the cementing that increased operational risks to Transocean, the contractor that owned and operated Deepwater Horizon, according to the report.

The cement’s failure to maintain the integrity of the well was the central cause of the blowout. BP worked with Halliburton to design the cement job.

Because the well was over budget, “BP sought to minimize these losses by reducing the volume of cement it pumped into the well” and a key analysis recommended by a Halliburton engineer was skipped, according to the report.

The Justice Department has already sued the well’s owners, BP, Anadarko Petroleum Corp and Mitsui & Co, as well as Transocean. Those civil claims are before a federal court in New Orleans, where a trial allocating blame for the spill was scheduled to begin in February.

“Today’s report increases the likelihood that BP, Transocean, and Halliburton will face criminal charges for their roles in causing the Gulf oil spill,” said David Uhlmann, a professor at University of Michigan Law School and formerly the top environmental crimes prosecutor for the Justice Department.

In June 2010, U.S. attorney-general Eric Holder announced that the Justice Department had opened criminal and civil investigations into the causes of the disaster.