The White House estimated on Monday that Hurricane Irene will cost federal taxpayers $1.5 billion in disaster relief, further ballooning a government account that was already the focus of fresh partisan friction between President Barack Obama and Congress. 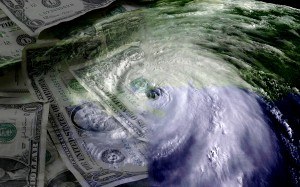 The preliminary estimate, released by White House budget director Jacob Lew, is on top of $5.2 billion needed for other recent disasters, including tornadoes that leveled much of Joplin, Mo. Lew said the $1.5 billion should last through next year.

The Obama administration has said last month’s debt ceiling deal with Congress allows the government to pay for disaster spending by borrowing, which increases federal deficits. That is a long-time practice for financing emergencies. The House’s No. 2 Republican, Majority Leader Eric Cantor of Virginia, has said disaster spending should be offset by cutting other parts of the budget.

“We are one country. A disaster in one corner is felt by Americans all across our land. That is why when it comes to taking care of our neighbors in need, we will not let politics get in the way and will do what is right to help them recover and rebuild,” Lew wrote.

The cost estimate comes as Congress is returning from its summer recess. A Senate Appropriations Committee subcommittee, headed by Democrats, is scheduled to meet Tuesday to consider a spending bill that includes disaster aid.

The Federal Emergency Management Agency has less than $800 million in its coffers to pay for help needed before Oct. 1, when the government’s new budget year begins. Because the money is so short, some rebuilding projects have already been delayed to provide Irene’s victims with essentials like food, water and housing.

Irene raked the eastern U.S. from the Carolinas to Maine beginning on Aug. 28, causing over 40 deaths, destroying homes, washing out roads, pounding beachfront communities and flooding towns in Vermont and upstate New York. Damage is expected to total in the billions, but federal aid is not for expenses covered by private insurance.