As the water recedes from Hurricane Irene, lawyers are expecting disputes over insurance coverage to pour in. 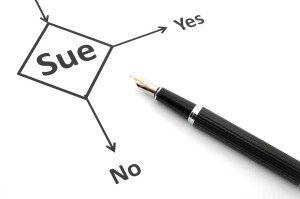 The biggest fights will stem from arguments over property damage and whether it resulted from wind or water, legal experts said. Similar questions arose in the aftermath of Hurricane Katrina six years ago.

Disputes over the extent of coverage and the reimbursement amounts are also likely as property owners face soggy basements, shattered windows and tree-beaten roofs.

Battles over who pays for what will start funneling into state and federal courts and arbitration forums in the coming months, lawyers and scholars said.

State Farm, Allstate and Liberty Mutual are some of the bigger insurers in the affected areas. Liberty Mutual and State Farm said through spokesmen that their focus right now was efficiently handling claims from people in those regions. Allstate was not immediately available for comment.

The first step in the process will be for policyholders to make their claims.

“A flood of claims may lead to a river of litigation,” said University of Pennsylvania Law School professor Tom Baker.

Homeowners insurance policies usually cover damage from wind, but not flooding. And while mortgage providers usually require homeowners in flood-prone areas to buy separate policies through the National Flood Insurance Program, property owners in other areas, including upstate New York, Connecticut and Vermont, often do not have such insurance.

Because of the widespread and costly destruction from floods, insurers historically have not provided coverage for them.

Those who do have flood insurance may find it hard to get reimbursement from the government program, which is overburdened from Hurricane Katrina.

Insurance policies can be hyper-detailed and laws vary from state to state, so it is difficult to predict exactly when any litigation will begin.

The outcome of most cases will hinge on experts and eyewitnesses, said Wayne Lee, a partner in New Orleans-based Stone Pigman Walther Wittmann who represented insurers defending class actions after Hurricane Katrina.

One “extensively litigated” issue, he said, was whether flood insurance covered wind-driven flooding, including storm surges. Generally speaking, it didn’t.

“Courts, at least in Louisiana, said a flood is a flood,” Lee said.

More difficult questions arise when a home has been swept away. Determining the cause of the destruction is tough when nothing is left, Lee said.

Another factor that will affect the volume of litigation is whether a jurisdiction allows policyholders to recover legal fees, said Amy Bach, executive director of the consumer advocacy group United Policyholders.

Laws vary widely, however, based on factors such as the dollar amount of claims. New York, Vermont and North Carolina, for example, usually allow successful litigants to recover costs and fees, but the standards are different in each state.

“If I can’t recover my attorney’s fees, I’m probably not going to bring the case,” Bach said.

Individuals with separate policies for homeowners and flood insurance could find themselves in both state and federal courts, Lee said.

Federal courts have exclusive jurisdiction over disputes arising from coverage under the National Flood Insurance Program. A fight over a claim made against an insurer based in the same state as the policyholder could end up in state court.

What differentiates Irene from other hurricanes is that it struck densely populated regions of the upper East Coast, said Michael Troisi, a partner in Rivkin Radler in Uniondale, New York, who focuses on insurance defense.

With more claims being made, more disputes will arise, he said, but residents had a lot of preparation time, which may have reduced damage.

Disputes over claims are by far the exception since “insurance companies have their reputations to consider,” said Baker. Even so, he added, the lawsuits are coming and could take years to resolve.