Washington’s never-ending budget battle threatened to snarl the recovery from Hurricane Irene as a top Republican said Monday that any federal aid will have to be offset by spending cuts elsewhere.

“Yes there’s a federal role, yes we’re going to find the money. We’re just going to make sure that there are savings elsewhere,” Representative Eric Cantor, the No. 2 Republican in the House, told Fox News. 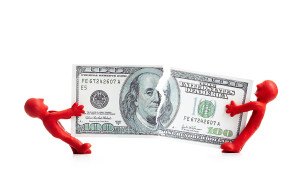 Irene killed at least 21 people and caused substantial property damage from North Carolina to Vermont over the weekend. Cantor’s Virginia district was among the areas hit by the storm as well as the epicenter of an earthquake last week.

Obama administration officials said they had no estimate of the storm’s cost as they were still assessing the damage, but other elected officials and companies have indicated that it will likely amount to billions of dollars.

The administration will likely have to ask Congress for additional funding at a time when lawmakers are debating further budget cuts.

The Federal Emergency Management Agency has suspended funding for some rebuilding programs from earlier disasters to ensure that its disaster-relief fund will not run out of money, according to agency administrator Craig Fugate.

FEMA currently has $972 million in the fund, according to congressional Republicans.

Obama also approved federal funding for individuals in Puerto Rico who were affected by the storm. People in other storm-ravaged areas also could become eligible for federal money once damage assessments are completed, Fugate said.

“Once we know how much impact Irene will have we’ll have a better sense of what assistance we may need,” Fugate said on a conference call.

This year has been one of the most extreme for weather in U.S. history, with $35 billion in losses so far from floods, tornadoes and heat waves.

FEMA has struggled to fund these recovery efforts, warning lawmakers that its disaster-relief fund is running low.

The Republican-controlled House passed a bill in June that would give FEMA an additional $1 billion in disaster-relief funds for the current fiscal year, which ends Sept. 30, as well as $2.65 billion for the coming fiscal year.

But that bill would require the White House to cut other government programs if it needed more money for disaster relief — a provision the administration has said it would ignore.

The Democratic-controlled Senate has yet to take up the measure.

Cantor and other Republicans have made spending cuts a top priority since taking control of the House in November 2010 in an effort to bring trillion-dollar budget deficits under control.

Republicans in the past have not been reluctant to approve disaster-relief money free from normal budget constraints.

After Hurricane Katrina devastated New Orleans and much of the surrounding region in 2005, the Republican-controlled Congress approved $81.6 billion as “emergency spending” outside of the normal budget process.