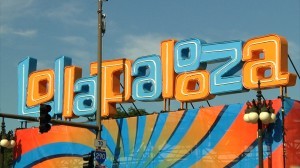 “My background is with theme parks as well as motion picture and television,” Holehouse said. “I came from the industry, and now I’m taking my expertise to help Fireman’s Fund understand what their role is here, and just to minimize the risk. We’re never going to eliminate it.”

Preparing for an event that gathers approximately 80,000 attendees a day starts early. The festival organizer begins planning next year’s function days after the current one ends. For Fireman’s Fund, Lollapalooza insurer since 2008, underwriting and risk management begins eight months prior to the event.

“We’ve talked about crowd control, security,” Holehouse said. All of those things come into play, and they all come into play early.”

The issue of crowd control came up at the Wisconsin State Fair, where dozens of youth started fighting inside the park’s amusement area on opening day last week. Once the park closed, the fights spilled outside into surrounding neighborhoods. According to officials, more than 30 arrests were made and 18 people were injured in or around the grounds.

Changes were enacted a day later. A new rule requiring anyone under 18 entering the park after 5 p.m. be accompanied by a parent or legal guardian was put into place. The policy is similar to a South Carolina state fair policy enacted in an effort to crack down on unruly behavior.

At Lollapalooza, there are several layers of security to address crowd control and fan unrest.

“There’s three different levels of security, from artist security backstage, to front line security, to gate security,” Holehouse said. “When there is a problem, they create a wedge to go in, take care of the problem, bring them out. Whether it’s a drunk participant or a problem with just groups, they try to separate and reduce the threat that way.”

The stage collapse at Indiana’s State Fair this past weekend underscores the importance of risk management to festival organizers and their insurers. Despite an onsite meteorologist, festival organizers were unprepared for the 60 to 70 mph wind that caused the stage to tumble, killing five and injuring dozens of people. Just last month, a stage collapsed at the Ottawa Bluesfest in Canada during a performance by Cheap Trick. The collapse, said to have been caused by a strong storm that rolled into the area, occurred moments after the concert was cancelled and the band exited the stage. Even so, some injuries were reported.

In an effort to foresee problems before they occur, Holehouse pays close attention to news and YouTube videos for information on past stage collapses at other concerts and festivals around the world.

Another concern during festivals and concerts is food safety. Last year, 37 confirmed cases of E.coli were linked to food eaten during Folklorama, a multicultural festival held annually in Canada.

“We’ve been working on the specifics of this probably for eight months, from a risk management standpoint…making sure vendors are properly covered, making sure we have risk transfer systems in place for all the people that are coming in with their businesses, and making sure that there is ample insurance to go around,” Schmickle said. “Everybody on this site who does business here is contractually obligated in some way or form. For us, it’s indemnification through the insurance process. But there’s all sorts of terms and conditions that go into these contracts.”

As of the posting of this article, there were no reported problems at the recent Lollapalooza festival.

Colin Fly, Gretchen Ehlke and Scott Bauer of the Associated Press contributed to this report.

Heavy Rains in the Balkans Cause Flooding, Killing 6 People