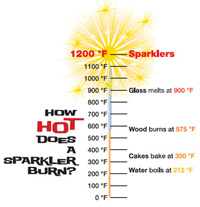 The data shows that in 2010, during the 30 days surrounding July 4, these fireworks sent about 1,900 injured consumers to emergency rooms.

Statistics show that in all of 2010 about 8,600 consumers ended up in hospital emergency rooms due to injuries involving both legal and illegal fireworks, according to the CPSC. Three fatalities were also reported during the same time period.

The annual report on fireworks also indicates that approximately 40 percent of the estimated injuries were to children 15 years of age or younger.

Burns and lacerations to the hands, legs and eyes were the most frequently reported injuries.

According to the National Fire Protection Association (NFPA) 2009 figures, fireworks caused an estimated 18,000 reported fires, including 1,300 total structure fires, 400 vehicle fires, and 16,300 outside and other fires.

The fires resulted in one death, 30 injuries and $38 million in direct property damage

There are more U.S. fires reported on July 4 than on any other day, and fireworks account for more than half of those fires, according to the NFPA.

As of 2011, four states have banned all fireworks: Delaware, Massachusetts, New Jersey, and New York.