Insurance claims dollars are helping to rebuild Lower Manhattan even eight years after the Sept. 11, 2001, terrorist attacks. The 9/11 attacks produced the second largest loss in the history of insurance, falling just behind the claims losses left by Hurricane Katrina in 2005.

In total, the 9/11 attack generated insured losses of $39.5 billion (adjusted to 2008 dollars), including property, business interruption, aviation, workers’ compensation, life and liability insurance claim costs. About two thirds of these losses were paid for by reinsurers, companies that provide insurance for insurers. (See graph below) 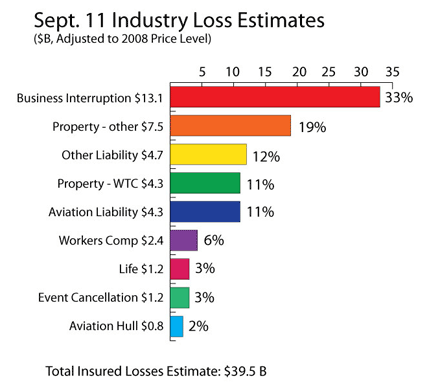 A total of 2,976 people perished in the Sept. 11, 2001 terrorist attacks in New York, Washington, D.C. and Pennsylvania, excluding the 19 hijackers. It was the worst terrorist attack on record in terms of fatalities and insured property losses, which totaled about $23 billion (in 2008 dollars).

“9/11 was the largest loss in the history of insurance until Hurricane Katrina in 2005 when insurers paid claims totaling more than $40 billion to help people along the Gulf coast rebuild their homes and businesses,” said Robert P. Hartwig, the Insurance Information Institute’s president and chief economist. “Insurance claim dollars are playing an essential role in rebuilding Lower Manhattan.