The legs of the carnival ride called “Downdraft” rise and spread before they start to spin, the empty cars on the ends leaning outward, as amusement ride safety inspectors Bill Szerletich and Brian Brown watch.

A bystander at the midway of the Illinois State Fair suggests that a true inspector would take the ride himself. They do, sometimes, Szerletich said last week. In fact, his boss, Labor Department Director Joe Beyer, had just been there a day earlier, testing a ride.

Szerletich, Brown and four other Labor Department inspectors continue their checking and rechecking of about 65 carnival rides at three different locations on the fairgrounds.

“They’re underneath this equipment, on top of it, they’re looking at every piece of it, every connection, every pin, everything,” said assistant Labor director Chris Wieneke. “Each ride, there’s a set time period for how long it takes – it takes exactly how long it takes to go over every inch of that ride and then wait for any fixes that have to be done to make sure it can operate safely.” 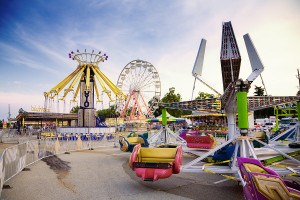 The inspectors crawl up, over and around about 4,000 rides a year at various amusement parks, street fairs, and carnivals, Wieneke said, looking for anything amiss that could lead to injury.

Incidents such as one in July 2017 at the Ohio State Fair, in which a car came loose from a whirling ride, killing one and injuring seven, are cataclysmic and make tragic headlines. But injuries on amusement-park rides are “a rare event,” said Ken Kolosh, statistics manager for the National Safety Council .

The National Safety Council has analyzed carnival injuries at fixed-site parks – Six Flags, for example – since 2003. Its latest report, of 2015 data, found about 1,500 injuries, or less than one per 1 million rides.

In other words, the council estimates there is a one-in-1.25 million chance you’d be injured if you step up and strap in.

Kolosh cautions, however, that the analysis is only of fixed-site attractions, not mobile ones like at county or state fairs that only operate for brief periods. No one has analyzed that data, Kolosh said. The reason, primarily, is that fixed-site operators have turnstiles that count attendance and even ridership. Festivals such as the state fair might count gate entrances, but there’s no way to count carnival riders.

That’s where experience plays a part. The Illinois inspectors aren’t reinventing the wheel each time they see a new octopus-shaped twirler.

That was evident when Brown stepped up on Chopper Charlie, another whirling ride with four-seat helicopter-shaped compartments. He spots a loose nut almost by intuition and carefully marks it in his notebook.

“We see these rides several times a year,” Szerletich said. “You get used to seeing things, know what to look for.”

The U.S. Consumer Product Safety Commission reports that nationally in 2017, there were 29,400 emergency-room visits because of amusement-park attraction injuries. But “amusements” are broadly defined. Spokesman Thaddeus Harrington said they include fixed-site midways and mobile carnivals, water parks, inflatable slides and “bounce houses,” and coin-operated or free attractions at restaurants and shopping centers.

The fair is underway, but the inspectors aren’t gone. Wieneke said they’ll make unannounced inspections through Sunday’s close, not only of the equipment, but to ensure operators – and the riders – are following the rules.

Parents play a part, too. The Labor Department publishes guidelines for safe riding and the National Safety Council encourages fair-goers to aggressively report things that don’t look right and remember that age, height and weight restrictions are for safety. In short, council president and CEO Deborah A.P. Hersman said, “If you ever feel uncomfortable, do not go on a ride or down a slide.”

After all that, Wieneke acknowledged he still holds his breath until it’s over.