North Dakota’s Transportation Department is altering its recipe for icy roads to cut costs, taking sand out of the mix and relying solely on salt to treat highways when the temperature remains just below freezing.

The same amount of salt will be applied as before on state highways but taking sand out of the beds of snowplow trucks will allow them to travel five times as far, saving fuel and time without losing ice-melting efficiency, said Mike Kisse, program manager for the agency’s maintenance division in Bismarck.

Kisse called it a “major savings” for the Transportation Department, which like all North Dakota agencies is dealing with tighter budgets. 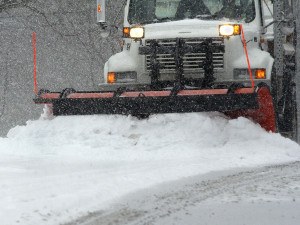 Historically, the agency has used a mix of 500 pounds of sand to 100 pounds of salt to treat each mile of highway, Kisse said. The state has 350 snowplows to fight an average of 2 to 4 feet of snow each winter.

About half the of the state’s eight road districts have been experimenting with the salt-only treatment for the past few years, and now all are “slowly transitioning” to it, Kisse said.

Agency spokeswoman Jamie Olson said the salt-only treatment has proven just as effective and safe for drivers as when it was mixed with sand.

“Sand simply was not helping get rid of ice or snow by any means,” she said.

Cutting down on sand also will lessen the potential of clogged roads and waterways from runoff, Kisse and Olson said.

Traditional rock salt, or sodium chloride, lowers the freezing point of water to about 15 degrees, Kisse said. The salt, which is purchased from Canada, accounts for about 10 percent of the agency’s snow-fighting budget that averages about $22 million annually, he said.

Below 15 degrees or so, saltwater is blended with beet juice from the sugar refiners in the Red River Valley. That mixture is effective to about 18 below zero, Kisse said.

When temperatures drop well into double-digits below zero, very little is effective, Kisse said. Sand is often sprinkled on the roads at that time to increase traction.

Potassium acetate, which works as a deicer to temperatures as low as 70 below zero, is used on some bridges in the state but its cost, up to $8 a gallon, prevents its use on highways, Kisse said.

Until a decade ago, the Transportation Department had used salty oil well wastewater to melt ice and snow on the roads until an Associated Press report in 2007 found the Health Department knew nothing of the practice. The state promptly halted the treatment and has not used it since, Kisse said.

The Health Department conducted studies that, they said, indicated the briny wastewater – which can be 10 times saltier than seawater – did no harm to water or roadside vegetation.