Should injured pro athletes be allowed to earn worker compensation benefits until they are 67 years old, like other workers, even if their athletic careers normally would have ended more than 30 years earlier?

That issue is being debated between the Chicago Bears and the NFL Players Association in the Illinois Legislature as one unlikely element of a compromise proposal to end a nearly two-year-long fight over the state’s budget.

The Bears are leading other Chicago sports franchises in backing a measure, Senate Bill 12, that would reduce a former player’s ability to tap into workers compensation after a career-ending injury. They want to cap certain payments to athletes at no older than 35 or five years after their injury. Currently they can claim benefits up to age 67, like other workers.

Neither the teams nor players’ advocates will say how much money is at stake. They agree it is not a relatively big pot – while theoretically some could claim millions, most if not all athletes settle their claims for reduced sums up front, the players association says.

Only a handful of pro players filed for the benefit here in the past four years, although the association would not identify them or describe their individual cases.

But one example in the public record of an athlete who claimed this compensation is former Bears offensive lineman Ted Albrecht, a first-round draft choice whose career ended with a back injury in 1982. An arbitrator tried to deny his claim, but an appeals court ruled he was entitled to receive an award based on the difference between his $130,000 Bears salary and what he later earned as a travel agent and sportscaster, which ranged from $87,000 to $36,000 between 1983 and 1986.

The Bears say Illinois’ law regulating compensation is overly generous. They also argue the existing rules attract players from other states to file claims in Illinois.

“Will there be savings? Yes, there will be savings,” said Bears attorney Cliff Stein. But the Bears say the measure is really about being fair to other Illinois workers with longer careers in other fields. 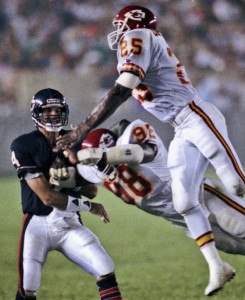 NFL Players Association spokesman George Atallah said the benefits provide a lifeline to players whose athletic careers end suddenly – especially lower paid athletes performing just on practice teams or in minor leagues, who may lack sufficient savings and education to fall back on.

“The savings to these (team) owners are negligible whereas the benefits to these players are everything,” Richard Gordon, an attorney who represents NFL players, told The Associated Press.

Napoleon Harris, a former NFL linebacker and now a Democrat in the Illinois Senate, opposes the provision. He said it would unfairly “carve out” professional athletes from laws meant to protect employees.

“It almost feels like players are being used,” Harris said. “The owner’s not limping after the game, but the owner’s collecting billions of dollars in profits.”

It’s not the first time NFL teams have urged lawmakers to rein in compensation claims. California passed a measure in 2013 pushed by the NFL that restricted out-of-state players from filing there.

States differ in how much they require employers to compensate injured workers for decreased earning potential. Bears officials argue that no state offers payment for as long or as much as Illinois does, but the players association contends that some state compensation laws are comparable.

The Illinois legislation is backed by Chicago’s other major sports teams – the National Basketball Association Bulls, the National Hockey League’s Blackhawks and the Cubs and White Sox of Major League Baseball. All of them joined the Bears in signing a letter last month to Senate leadership urging them to OK the provision.

The change was tucked into a proposed “grand bargain” compromise the Senate is negotiating to break the state’s budget standoff. Republican Gov. Bruce Rauner has pressed for overall worker compensation reform as part of a deal. Though sponsored by Senate Republican leader Christine Radogno, the provision’s prospects are uncertain as the impasse grinds on between Rauner and Democratic leaders who control the legislature.

Under current law, all Illinois residents can claim benefits for two-thirds of the difference between what they were making when they were injured and what they’re able to make thereafter. Maximum damages are capped at the state’s average weekly wage of $1,070, meaning no athlete could receive more than $56,000 per year in insurance pay-outs.

The change would not limit athletes whose injuries prevent them from holding any job from claiming benefits.