Injury and property crashes have increased with the raising of speed limits on the state’s rural interstate highways, according to the Ohio Highway Patrol.

The highway patrol said that there’s been a 21 percent increase in crashes on interstate highways where the speed limit has been raised to 70 miles per hour since 2013, The Hamilton-Middletown Journal-News reported. 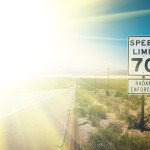 Highway patrol troopers have investigated nearly 334,000 crashes on all roads, state routes and interstate highways from 2011 through 2015.

The patrol said that during that same time, fatalities decreased slightly from 48 to 43.

“Motorists have to understand that as speed (of the car) increases, the reaction time decreases to adjust to conditions such as changing lanes, an object in the road, something falling off a truck or a deer crossing the road,” said Lt. Craig Cvetan, the Ohio Highway Patrol’s public affairs commander.

Rather than increase speed limits, the Governor’s Highway Safety Association, suggests states and communities enforce existing speed limits through the use of police officers and speed cameras in order to reduce speeds and crashes.

Maximum speed limits are set by the states and have been on the rise since then, the newspaper reported.