Farmers rumbling down the road in feed trucks are a common sight in Nebraska, but they may be breaking the law.

Tractors, fertilizer spreaders and other heavy farm implements fall into a legal gray area on the state’s roads, creating confusion among farmers and ranchers, and forcing some to pay thousands of dollars in fines.

At issue are the state’s weight and load restrictions, designed to keep heavy vehicles from causing damage to roads and bridges. Two of Nebraska’s leading farm groups say the rules haven’t kept pace with farming equipment and trucks that have grown larger and heavier over time.

Nebraska lawmakers will wade into the debate, as Sen. Jim Smith of Papillion has introduced a bill that would exempt several types of farm equipment from the weight and load restrictions. 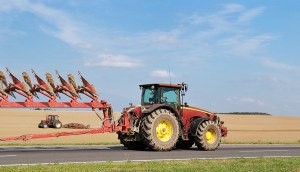 Farm equipment would remain banned on Interstate 80, and Smith said he’s preparing an amendment that would keep weight and load restrictions in place for bridges. The Legislature’s Transportation and Telecommunications Committee will consider the measure during a hearing today.

“We want to ease the restrictions a little on farmers, but also protect the well-being of our roads,” said Smith, the committee’s chairman. “This seeks to clarify what is lawful, what is proper.”

The bill could face resistance from Nebraska’s county governments, which blame the heavy machines for damaging their roads. The wear tends to be worse around feedlots because trucks hauling manure generally weigh more than other farm trucks, said Larry Dix, executive director of the Nebraska Association of County Officials.

Dix said his group has received reports from county highway officials about farm equipment “tearing up the roads” and forcing them to make costly repairs.

A spokeswoman for the Nebraska Department of Roads said staffers who were reviewing the bill were unavailable Friday. In a fiscal note estimating the bill’s impact on the state, the department said allowing the heavier vehicles would “increase the wear and tear on roads, highways, bridges and culverts.”

Cattle owners say the bill would allow them to operate modern farm machinery on roads near their property and clarify which equipment they can legally use. The legislation would exempt implements such as tractors, fertilizer spreaders, chemical application vehicles and mixer-feeder trucks from the weight and load restrictions.

Ranchers in Dawson County have gotten slapped with fines as high as $2,800 for driving heavy farm equipment on gravel roads, said John Schroeder, a feedlot owner near Cozad.

In many cases, however, the fines were reduced or dismissed because the law doesn’t clearly identify which farm equipment is subject to weight restrictions.

Schroeder said he and other residents have a strong interest in maintaining the roads near their land, but they also need them to do their jobs.

Joel Weber has faced several fines for driving feed truck to his two feedlots in southeast Nebraska, each one roughly a mile from his home near Dorchester. The only connection between the properties is the state highway.

The fourth-generation farmer said he tried to comply with the law by adding axles to some of his vehicles, which helped distribute the weight. But even now, he said the state’s requirements remain unclear.

“My job is to run a feed yard, not interpret the law,” Weber said. “I want to be within the legal limits, and that’s what we’re trying to do. But when laws are left open for interpretation, it’s hard to know whether you’re doing the right thing.”

Two leading agricultural groups in Nebraska began to lobby for the changes after their members throughout the state complained that they were getting ticketed. A single citation can cost several thousand dollars.

The Nebraska Cattlemen Association tried to tell its members how to comply with the law but discovered that the state didn’t clearly define which farm and ranching equipment was exempt from its weight restrictions, said Laura Field, a lobbyist for group.

Nebraska’s bill is modeled after a 2014 Kansas law that exempted certain pieces of farm equipment from that state’s highway weight and load restrictions. Iowa and Wisconsin have adopted similar laws.

“This is high on our priority list,” Field said. “We really feel like this bill is something that will make a difference.”

Farmers try to minimize the time spent driving their equipment on roads, but often they have no choice because they own multiple parcels in different locations, said Lavon Heidemann, a lobbyist for the Nebraska Farm Bureau Federation.

Heidemann said his group views roads as crucial to the farm economy and has fought to preserve them. Last year, the Farm Bureau endorsed a 6-cent-per-gallon fuel tax increase to help pay for road and bridge maintenance.

But the current weight restrictions fail to account for changes in modern agriculture, he said. Some of the newest implements are so heavy that they violate the rules even when they’re empty.

Heidemann said the bill would legalize what many farmers are doing anyway.

Producers “just want to get from one field to another,” Heidemann said. “We don’t want (the rules) to become a hindrance. The majority of farmers don’t know that they’re violating the law.”