Smoke, flames, ash. A fire engine with lights and siren blaring, and uniformed officers yelling orders as a building blazes nearby.

When he arrives on-scene of a fire, Josh Scalf, a 10-year veteran of the Lafayette Township Fire Protection District in Floyds Knobs, sees all that. But he also sees the complex chemistry behind the fire – oxygen, fuel and heat in a sustained chain reaction that, if misunderstood, is potentially deadly.

“Having an understanding of the chemistry of fire is vital” for firefighters working to prevent loss and injury, Scalf, who, when he isn’t on-duty, studies chemistry at Indiana University-Southeast, told The Courier-Journal of Louisville, Kentucky.

He explains that chemistry in a “Fire Engineering” national magazine article series, beginning with the recently published “An introduction to fire: Going beyond the basics,” which he hopes will help his colleagues do their jobs more effectively and safely. 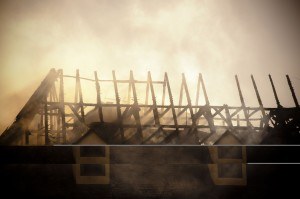 For example, knowing what causes a specific color or amount of smoke can change the way firefighters attack a blaze. “It helps you to be more familiar with the warning signs of smoke conditions,” he said, which could save lives, if responders interpret and react appropriately.

Twenty-two firefighters died in 2012 during fires, either at the scene of a structure, vehicle, wildland or outside fire, according to the U.S. Fire Administration in 2013.

While understanding chemistry likely can’t prevent all injuries or deaths, it can improve firefighters’ ability to “put out the fire and be able to return home safe to our families,” said Lafayette Township district’s Chief, Jeremy Klein. “The more we know, the safer it is for everyone operating on the scene.”

And there’s a lot to know, said Dr. Jim Williams, a visiting professor of chemistry at IUS who helped Scalf ready his article for publication.

“There’s a lot of avenues,” Williams said. For example, the Scalf could explore the science behind flame-resistant materials or the foam used to suppress fires.

“Why does this water foam? How does it fight fires?” he said. “Everything we touch is chemistry.”

Future articles in the three to four installment series may include an introduction to incomplete versus complete combustion, or biochemistry topics such as glucose in the body. The goal isn’t to overwhelm, but to introduce complex concepts in an simple and immediately usable way, Scalf said.

“I’m hopeful that I will be able to share some of the knowledge I’ve been able to glean with the fire service,” he said. “Who knows, this might help a brother or sister firefighter across the country to stay alive and stay in the fight one more day.”