The addition of special lanes for bicycles on many Indianapolis streets hasn’t limited the number of accidents, which are rising along with the increase in riders.

Experts say part of the problem may be confusion over Indiana’s complicated bicycle laws. The Indianapolis Star reports that bicycle accidents have increased nearly 50 percent in Marion County since 2011.

Advocates and legal experts alike say neither drivers nor cyclists understand how they’re supposed to interact. Motorists and bicycles are supposed to share the road, but what does that mean? The debate can be over as things as simple as where to ride – in the middle of the lane or close to the curb.

“According to the letter of the law, a cyclist can be in the middle of the road in his lane cycling, as long as he’s following the rules of the road,” said personal injury attorney Lance Worland. “I think drivers a lot of times aren’t aware of that, and don’t realize the cyclist has a right to be there.”

Marion County Superior Court Judge David Dreyer, whose court recently handled two crash cases, said the laws are largely untested. The slow-moving vehicle law says cyclists should be in the right-hand lane “or” as close to the curb as possible.

Nancy Tibbett, executive director of Bicycle Indiana, said her group advises bicyclists to use the right one-third of the lane. If they ride too close to the curb, motorists may try to pass them in the same lane – which could be too close for safety. 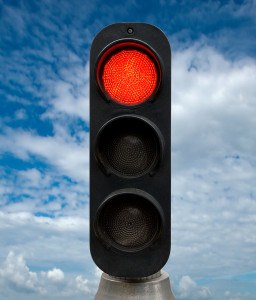 And now another complication has been added. As of July 1, Indiana law allows motorcycles, bicycles and mopeds to run red lights when the signal has been stuck on red for more than two minutes. It’s meant to help riders whose vehicles aren’t heavy enough to trip sensors that make stoplights turn green.

And some bicyclists make others look bad by defying the rules of the road.

“That means stop at stop signs, stop at red lights … there are a lot of cyclists that don’t do that,” Worland said. “It gives cyclists who are serious about it a bad rap.”

Worland said his firm has seen an increase in cycling-related injuries in recent years, with most of them occurring at intersections. In one case, Dreyer upheld a $3.9 million ruling awarded to a then-17-year-old cyclist after he was hit by a school bus in 2010.

Bicycle-related collisions in Marion County jumped from 170 in 2011 to 250 in 2013, according to state crash report data. Statewide, such collisions increased 8 percent.

Bicycle Indiana wants to make rules that are in place in some communities, like a 3-foot buffer zone when cars pass bicycles, state law.

“As much as I’d like to say common sense should always prevail, we also know that it doesn’t,” Tibbett said.