Looking for a shortcut to make your walk home a little shorter? Don’t try the one that cuts across the railroad tracks.

That’s the advice from the Norfolk Southern Police Department, which is teaming up with the Mishawaka police to bring Operation Lifesaver to Michiana, Ind. The program is designed to warn residents of the dangers of trespassing on train tracks and rail yards — as well as the potential legal consequences of getting caught.

“Anybody that works or grows up around railroads should be aware of the dangers posed by large, moving equipment,” Norfolk Southern Manager of Facility Security and Crime Analysis Gary Hedgepath said at a news conference in Mishawaka on Tuesday. “Sometimes they have a tendency to forget that.” 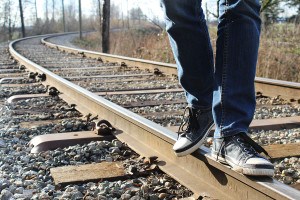 According to Hedgepath, 844 trespassers were hurt on railway property across the U.S. in 2012. In 439 cases, the injuries were fatal, including two deaths in St. Joseph County.

“If you have an encounter with a train, more likely than not it’s going to be fatal,” Hedgepath told the South Bend Tribune. “Quite often the casualties that do occur are catastrophic.”

Railroad and Mishawaka police undertook part one of Operation Lifesaver on Tuesday, visiting businesses and handing out pamphlets and other informational materials to warn pedestrians of the dangers of crossing in nondesignated areas. The second part of the project begins today, when police will step up enforcement for anyone caught trespassing, which is a Class B misdemeanor in Indiana.

Since Operation Lifesaver began in 1972, the number of pedestrians and cars hit by trains has fallen drastically. But Railroad Police Special Agent Matt Johnson said he still sees plenty of people crossing the train tracks, from school kids to bar-goers to people carrying home groceries.

“They’re going up against thousands of pounds, tons of steel,” Johnson said. “They don’t think about it. (They say) ‘I’m in a hurry.'”

Johnson said there are several spots in St. Joseph County that are particularly rife with trespassers. The area around Arnold Street in South Bend is particularly troubling, partly because the tracks curve, making it harder to see an oncoming train, and partly because many children cross the tracks at that spot.

“I see a lot of kids, little kids, and that’s always a huge concern,” Johnson said. “I see these little kids playing on the tracks, climbing on trains, climbing under trains. It’s a quick way to lose a life.”

Hedgepath also reminded residents that there are plenty of ways for an individual to get hurt even if he or she does not come in direct contact with a moving train.

Although it often takes a train over a mile to come to a complete stop, operators will throw on the emergency brake if there is a report of a problem — including a trespasser — up ahead. But that can cause a derailment, which means heavy equipment will spill over the side of the tracks. Hedgepath said pedestrians also could trip and hurt themselves while stepping over the rails.

“You could have a moving train stir up debris they could be struck by,” Hedgepath said. “Occasionally banding that secures some of the loads, there’s a possibility that could become unsecure, and that could pose a hazard.”

And while many people don’t believe they could fail to notice a very loud, very large train bearing down on them, Johnson said it’s easy for accidents to come about. Many people wear earphones while they walk, and they never hear the engine over their music. City noise ordinances prevent trains from blowing whistles while passing through Mishawaka, and it’s nearly impossible to judge the speed of an oncoming train, especially at night.

Johnson said everyone would be better off if pedestrians made a point of using designated crossings.

“These engineers and conductors, they suffer,” Johnson said. “They watch the person get hit. They’re helpless, they can’t stop (the train.) I don’t like to pick up body parts and that sort of thing, nobody does.

“I don’t like to notify family members that their teenage son just got killed by a train because he was in a hurry.”