Years of research have produced mixed views on whether different freeway speed limits for cars and trucks make roads safer, but Wayne State University researchers are taking a comprehensive approach to answering that question for state officials.

Peter Savolainen, Ph.D., associate professor of civil and environmental engineering in the College of Engineering, recently received a one-year, $175,000 grant from the Michigan Department of Transportation (MDOT) to review previous research; survey trucking industry groups; collect historical and new field data from Michigan and other states; and use these data as part of a statistical analysis.

Along with co-principal investigator Timothy Gates, Ph.D., WSU assistant professor of civil and environmental engineering, researchers will examine potential impacts of raising Michigan’s speed limit for trucks and buses. The results of the study, titled “Evaluating Differential and Non-Differential Freeway Truck and Bus Speed Limits,” will be delivered to MDOT officials, who ultimately will make policy recommendations based on the study results.

Differential speed limits, such as the ones in Michigan and Indiana, were set based on the idea that trucks require greater time and distance to stop due to their larger size. Larger vehicles tend to result in more severe injuries when involved in a crash. Savolainen said size is particularly relevant in Michigan because its truck weight limits are the highest in the country. 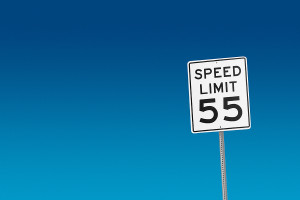 Uniform speed limits for cars and trucks, on the other hand, address
concerns that varying speeds may increase the potential for collisions. Further, higher speed limits tend to reduce travel times, creating potential economic benefits for the freight industry.

Michigan legislators have said they want to make data-driven decisions, and MDOT officials want to use the Wayne State study to examine the possible impacts of speed limit policy changes. “We’re comparing three scenarios,” Savolainen said. “One is to maintain Michigan’s current policy, which establishes a speed limit that is 10 mph lower for trucks and buses. A second alternative is to decrease the speed limit difference from 10 mph to 5 mph, and the third is to make a uniform speed limit for all vehicles.”

Although the study principally focuses on safety data, including truck-involved crash and fatality statistics, researchers are also considering effects on delays, pavement quality and air quality, in addition to seeking industry input to gauge potential impacts on freight operations. They also will collect speed data from Michigan, Ohio and Indiana, which share common freeways but have different policies and speed limits.

Researchers are unsure what their efforts will uncover, Savolainen said. “Previous studies in other states have yielded conflicting results,” he said.

“Our study will consider a broader spectrum of factors than prior research. We’ll also be taking a more careful look at the metrics we’re using to assess safety.”

As an example, Savolainen noted several studies that looked only at the total number of truck-involved fatal crashes.

“Changing the truck speed limits is not expected to impact all types of crashes equally. Consequently, we’ll analyze subsets, such as fatal crashes that occur during non-rush hour periods,” he said. “In many cases, speed is not necessarily a problem during rush hour due to high congestion. Similarly, certain types of crashes are more likely to be affected by speed limit policy, such as rear-end collisions.

“By carefully examining the impacts of speed limits from various aspects, we’re hoping to produce sound evidence that will lead to an informed decision as to Michigan’s future freeway speed limit policy.”