Leases have been signed on tens of thousands of acres in southern Illinois. Studies have hinted at the potential economic payoff of drilling for oil and gas deposits deep underground. But so far, oil and gas companies have held off on high-volume hydraulic fracturing in Illinois because the state lacks ground rules for the industry.

That could change under a regulatory bill being negotiated by officials from industry and agriculture, environmentalists, lawmakers and Attorney General Lisa Madigan. The bill, which would address everything from chemical disclosure to air and water pollution, could be introduced as soon as this week if the parties agree on the final language. 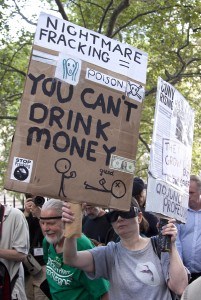 “From an industry perspective, they’re not going to invest millions of dollars in Illinois if they don’t know the regulations,” said Mark Denzler, vice president of the Illinois Manufacturers’ Association, which joined petroleum and transportation advocates and unions to form a coalition pushing for fracking regulations.

Hydraulic fracturing, or “fracking,” uses high-pressure mixtures of water, sand or gravel and chemicals to crack open thick rock formations and release trapped oil and gas. Combined with horizontal drilling, it allows access to formerly out-of-reach deposits – and has opened large swaths of the country for exploration, most notably in states such as Pennsylvania and North Dakota. The industry – which is eyeing the New Albany Shale formation that lies under southern Illinois and parts of Indiana and Kentucky – insists the method is safe and could create thousands of jobs.

But critics claim it contaminates air and water, could deplete water resources needed for agriculture and other uses, and would leave Illinois communities with no control over the practice.

“This is literally our land and our water and our lives on the line,” said Liz Patula, a Williamson County resident who belongs to Southern Illinoisans Against Fracturing Our Environment, a group of farmers, land owners and others who favor a 2-year moratorium on fracking to allow a task force to study safety issues and evaluate best practices. Sen. Mattie Hunter, a Chicago Democrat, already has introduced a bill calling for a moratorium, which is supported by some environmental groups, including the Sierra Club.

Patula said there is no reason for Illinois to rush into fracking without carefully studying implications for the environment, jobs, agriculture and tourism. She said she fears the industry could be “a boom and bust” for Illinois that would import workers from other states, then move on while leaving the state with long-term problems.

“What about farming and tourism? They could take serious hit from this,” said Patula. “Would it really create cheaper energy for Illinois and for how long? Why not invest in industries that can bring energy here forever and not put families out of their homes?”

While industry and environmentalists don’t often work on legislation together – especially on something as contentious as fracking – momentum is building for fracking in Illinois and it was wise for everyone to be at the table to establish regulations, those involved in the discussions said.

“Illinois is likely on the verge of a fracking rush, so it’s essential for that reason to have safeguards in place to protect the public,” said Ann Alexander, a senior attorney with the Natural Resources Defense Council’s Midwest program, who has participated in negotiations. “Illinois has the opportunity to be a leader here; we can do right what other states have not done right … with basic commonsense protections.”

The bill, which those involved in the talks say likely will be introduced in the state House by Rep. John Bradley, a Marion Republican, would set rules for limiting air pollution and protecting drinking water and establish setbacks from residential areas. Alexander said such basic protections are just a start, and lawmakers can tweak regulations as needed.

Bradley did not return phone messages from The Associated Press, but he told The State Journal-Register in Springfield that “there’s a desire that there be some certainty that it won’t be stopped at some point.”

The U.S. Geological Survey believes that the New Albany Shale, a formation hundreds of thousands of years old and roughly 5,000 feet below the surface – may hold 1 trillion to 8 trillion cubic feet of natural gas, just a fraction of 22 trillion cubic feet U.S. consumers go through every year. By contrast, the “gas rush” is most pronounced in the Marcellus Shale, stretching from Ohio to New York and beneath roughly two-thirds of Pennsylvania that’s believed to hold one of the biggest natural gas resources in the country, 43 trillion to 144 trillion cubic feet, according to the USGS.

The price of natural gas has fallen because of fracking, but energy companies believe Illinois’ New Albany formation may contain oil and other liquid hydrocarbons that are rarer and more profitable.

Jim Watson, a former Illinois lawmaker who’s now executive director of the Illinois Petroleum Council, said Illinois has the “opportunity to set a standard for the nation.” And he said it would bring jobs to one of the poorest areas of the state.

“The opportunity we have for the nation and Illinois is reliable energy and cheap energy, (which will) do nothing but good things for us,” Watson said. “If America can become energy independent, that’s huge.”