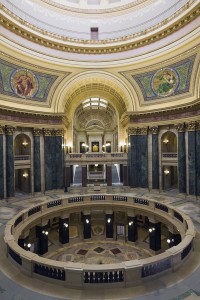 Workers for Peterson Cleaning Inc. of Rockford, Ill., stained about 100 marble stones in August before the work was halted, said Paula Veltum, an official in the Department of Administration’s facilities management division.

Veltum told a meeting of the State Capitol and Executive Residence Board that chemical testing of milky white markings on the stone suggested battery acid had leaked from a Peterson cleaning machine.

State workers began polishing the stained marble, most of it on the ground floor near the Rotunda, last week. It’s expected to take up to two months to restore, at an estimated cost of more than $16,000.

The state canceled Peterson’s contract in December, citing poor quality and lack of proper training for staff. Department spokeswoman Stephanie Marquis said in an email the state is reviewing the contract to dispute outstanding invoices and may consider legal action for damages.

Peterson spokeswoman Tracy Fraser declined to comment. She said the company hadn’t had recent contact with the state.