Northern Indiana and southwest Michigan have a new tool when it comes to sniffing out arson.

Sadie, a 16-month-old Labrador mix, recently completed training standards at the Maine Criminal Justice Academy and will be certified as an accelerant detection canine stationed out of Southwest Central Fire Territory in Portage Township.

The dog will be handled by, cared for and live with Anita Shultz, operations chief of the fire territory. Although Southwest Fire Territory owns the dog, it will be available to work arson scenes for all departments within a 150-mile radius, including South Bend, Elkhart and Niles.

The dog was obtained through a $25,000 State Farm grant – through its State Farm Arson Dog Program – that helped pay for the dog, its training and certification.

Shultz, who is a certified handler of accelerant detection dogs, spent the final five weeks of Sadie’s training in Maine.

“I think it will be an important tool for St. Joseph County and northern Indiana,” said Terry Korpal, fire chief at Southwest Central. “`It narrows down our work. We get better samples and do less digging. The dog will let us know where to dig.”

Sadie will have the ability to conduct both people and article searches in an effort to pick up accelerants, the South Bend Tribune reported.

For example, during a demonstration Tuesday at the fire station, Sadie was able to easily find where Shultz had placed a can with gasoline on it. She also successfully chose which of four firefighters had gasoline on their shoes.

Shultz said Sadie has been trained to use “scent discrimination” on objects. 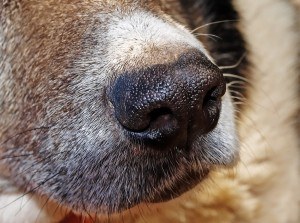 Food also plays a large role in how Sadie operates at fire scenes.

After Sadie picks up a scent, she’ll sit at the spot until she is given food. This rewards Sadie, but also tells investigators exactly where the accelerant is.

“She alerts us by sitting,” Shultz said. “It takes her less time than the investigators. She won’t come off (a scent) until she is fed.

“She also does people scent. Some arsonists like to stay and watch the scene.”

When she’s not at an arson scene, Sadie will stay at the station with Shultz when she is working.

Shultz is hoping Sadie gets called to scenes frequently.

“She needs to work for training purposes,” Shultz said.

Arson dogs have proven helpful in past investigations, officials say. A dog was called in from outside the area in February after a fire gutted Francesco’s Italian Restaurant in Mishawaka and was labeled suspicious.

Until Sadie’s arrival, the closest arson dog was stationed in Anderson, Ind. There have been about 300 dogs, including Sadie, that go through the State Farm training program since 1993.

“The dog will never replace the arson investigator,” said Paul Gallagher, a trainer with Maine Specialty Dogs. “The dog simply extends the capabilities. The scent discriminating abilities of a canine are better than any equipment we can take to a fire scene when arson is suspected.

“A few years ago, arson investigators would spend days, perhaps even weeks, sifting through evidence at the scene of a suspected arson.”