Christmas trees in Iowa and other Midwestern states could become the newest victims of the drought. 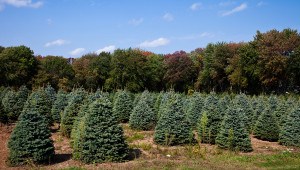 The Des Moines Register reported Monday that the hot, dry summer took a harsh toll on tree seedlings. By 2019, when this year’s trees are ready for harvest, the selection could be as sickly and sagging as the one in “A Charlie Brown Christmas.”

Growers have also reported losses in Minnesota, Wisconsin and Michigan.

“I’ve talked to growers across the Midwest up to upper Michigan, and everybody is sitting between 60 and 80 percent losses” on new seedlings, said tree farmer Jesse Randall, who also works with Iowa State University Forestry Extension. The supply of trees “is going to get real tight in upcoming years.”

Randall said the drought was especially hard on fir trees, which are popular among buyers because of their silvery evergreen hues and rich aromas.

Fir trees need a longer window of cool air to establish roots and harden. The early spring warmed the soil too quickly, and the scorching July – during which Des Moines saw two four-day stretches hitting 100 degrees or warmer – were too much for the seedlings to handle, Randall said.

“It was just a perfect storm,” Randall said. This summer was hard not only on seedlings “but second- and third-year trees that had flaws in their root system or were improperly planted.”

Meanwhile, thousands of tree seedlings in northwest Iowa have already died, according to the Sioux City Journal.

“We’re discovering that maybe 90 percent of our seedlings are lost,” said Neal Bork, of Country Pines Tree Farm near Marcus. “Anything that we didn’t water.”

Bork and other growers must replace the dead seedlings next spring, making for twice as much work during planting season, or have fewer trees for customers to choose from once the trees reach desirable height.

Officials say next year’s growing season will be critical in determining whether customers will have the size and variety of trees they’re used to in seven years.

The majority of the growers in the 80-member association lost more than 50 percent of their seedlings, Moulds said.