The storms that socked Ohio in late June and early July made for the third-costliest natural disaster in the state’s modern history, leading to estimated insurance claims of at least $433.5 million, an insurance industry trade group said.

The tally reported by the Ohio Insurance Institute doesn’t include the $29 million in damage to infrastructure and cleanup costs reported by 38 affected counties following the severe weather from June 29 to July 2.

The insured losses from those storms fell short of the damage caused by the Hurricane Ike windstorm in 2008, which had insured losses of at least $1.14 billion plus $38.6 million in other damage. The 1974 Xenia tornado outbreak was second costliest. 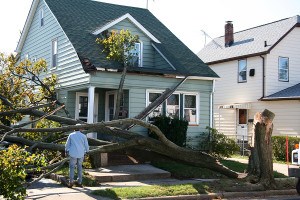 The recent storms caused widespread power outages, left significant strewn debris, and damaged public facilities and some rural electric cooperatives. Five deaths were blamed on the storms. One occurred in a barn collapse and four others were heat-related.

Ohio insurance claims are expected to be at least 96,725 and could reach as many as 107,300, the insurance group reported.

“The numbers tell us that the storms that came through in late June early July were significant not only in dollar losses but in number of claims,” insurance institute spokeswoman Mary Bonelli said.

The insurance group noted that the storms were the eighth major natural disaster to hit Ohio since 2011. Those include two winter storms in 2011 and six wind-hail storms.

“What we’re seeing is a trend toward more storms,” Bonelli said. “We’re seeing a higher rate of severity and frequency in the last three to five years.”

The major event this summer was the June 29 “derecho” straight-line storm that tore across the Midwest and mid-Atlantic regions with little warning and winds gusts of up to 100 mph.

As many as 4 million customers lost power from Indiana to Virginia, including a million across Ohio. The state then saw another line of severe storms roll through starting on July 1.