An Ohio woman severely injured when she went to the aid of a horse owner in danger of being trampled is challenging the state’s definition of being a spectator at an equine event as she seeks damages for her injuries.

Roshel Smith argues that her presence at the horse barn where the accident happened is not covered by the state law meant to limit lawsuits against the horse industry. 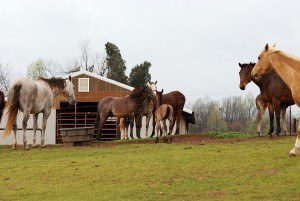 The owner of the horse who kicked Smith in the face says Smith met the definition of a spectator by her activities that day and should be prevented from suing.

The Ohio Supreme Court, which heard final arguments in the case last month, is expected to rule this fall.

Smith, 30, was on her day off in 2007 when she stopped by a horse stables at the Wayne County fairgrounds where she worked for her father, a horse trainer.

As Smith waited for her father, horse owner Donald Landfair pulled up in his horse trailer with two horses, according to court records. After successfully unloading the first animal, he was trying to unload the second, Annie, an untrained 2-year-old, when an Amish horse-drawn wagon came down the road and spooked the horse with its loud noise, according to documents filed with the Supreme Court.

After Annie knocked Landfair to the ground and was in danger of trampling him, Smith noticed what was happening and rushed to help, records show. The horse kicked her in the left side of the face, knocking her unconscious and leaving her with about $50,000 in medical bills, including extensive dental work that remains to be done, according to court filings and her attorney, John Rinehardt. Her lawsuit alleged Landfair acted negligently by trying to handle the untrained horse and failing to get help when unloading Annie.

Landfair has argued that the law in question contains a broad definition of being a horse event spectator and Smith fit that standard.

A trial court agreed with Landfair, but a state appeals court overturned the decision and sided with Smith.

Landfair argued in a filing with the Supreme Court that Smith voluntarily went to a place where equine activities were taking place.

“She watched those activities, including the activity that gave rise to her injury,” Landfair’s attorney argued in an April 9 filing.

But Smith said she was there that day to see her father and get some real estate advice, not to watch any type of horse activity that Landfair was involved in, her lawyer argued.

The Ohio Horseman’s Council has sided with Landfair and says that if Smith’s lawsuit prevails it could jeopardize the livelihood of thousands of Ohio horse owners, professionals and sponsors.