An Omaha, Neb., man says he’s been moving warily around his apartment, keeping watch for dangerous spiders that have moved in. 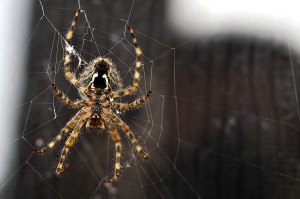 Dennis Ferraro, of the Douglas County Extension Office, says the higher number of spiders and bugs in general is likely due to a relatively mild winter and higher-than-normal summer temperatures.

Baumann says he plans to move out of the apartment in September. Until then he’s taking precautions such as shaking out his clothes and shoes before putting them on.