The number of boating deaths linked to alcohol on Illinois waterways has increased over the past five years, prompting authorities to appeal to boaters to take the risks of drinking on the water more seriously.

Nine people died last year in alcohol-related boating accidents, the highest number since 2004, the Chicago Tribune reported Saturday. According to the U.S. Coast Guard, Illinois ranked second in the nation in such fatalities after Wisconsin.

This year, one boater who disappeared in May was found dead in the Rock River in Winnebago County after leaving a bar.

“We see (drinking) as always playing a part in almost all of our accidents,” said Capt. Joe Morelock of the Illinois Department of Natural Resources.

Adding to the challenge, Morelcok says the department is struggling to keep a strong police presence out on the waterways because of budget cuts that have forced staff reductions in the ranks of the conservation police. The force has been trimmed by nearly a third in the last 10 years, he said, falling from 180 to 125 officers.

Among last year’s deaths was a passenger who fell overboard and drowned while carrying two drinks on a boat bound for Chicago’s Navy Pier to watch the Fourth of July fireworks. In another incident, a canoeist who had been drinking drowned on the Sangamon River west of Decatur.

Besides those killed, 13 people were injured last year – some severely – in 18 alcohol-linked accidents in Illinois, the Coast Guard said.

One of the state’s biggest trouble spots is the Chain O’Lakes, a group of more than a dozen interconnected bodies of water in Lake and McHenry Counties in northern Illinois. It’s a popular place for weekend revelers who often tie their boats together to form floating islands of vessels. 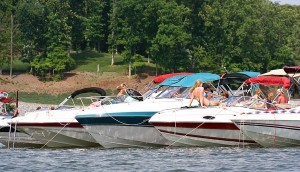 But the lack of officers makes it tough to enforce the state’s boating laws, Morelock said.

The blood-alcohol limit for those operating boats is 0.08 percent, the same as for motorists on the road. But because boaters are often exposed to heat and direct sunlight, the effects of alcohol can be more acute.

“(It’s) not the same as if you are drinking a few beers on your couch and watching a football game,” said John Fetterman, director of law enforcement for the National Association of State Boating Law Administrators. “You can be under the influence a lot quicker than you suspect.”