Live music at Saturday’s Taste of Tippecanoe will have a different look.

In February, with the memory of the 2011 Indiana State Fair disaster still weighing on the minds of all Hoosiers, lawmakers passed an outdoor temporary staging safety law. Throughout Indiana, festival and concert promoters now operate under new inspection guidelines and requirements, all with safety in mind.

The stage-rigging collapse at the State Fairgrounds just before the country duo Sugarland took the stage killed seven people and injured 58. 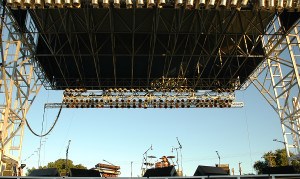 At the Taste, the most noticeable difference will be the addition of barriers around the stages. Steel fencing will keep the audience back more than 20 feet on four of the five stages. The smallest Taste stage, the Horizon Stage, will have barriers 18 feet in front of it.

“Law requires that whatever the height of the stage, add 8 feet to set the distance from the stage,” said Scott Freeman, Taste organizer. “People can’t press up against the stage now. That’s the law.”

State officials and the Department of Homeland Security signed off on the law. In greater Lafayette, Saturday’s Taste of Tippecanoe festival will be the first to adhere to the new regulations.

“We have everything in-line and is at code or better,” Freeman said. “It’s certainly been interesting, the whole process.”

Being the first, Freeman said it was important to set the standard for other outdoor festivals that utilize outdoor temporary staging. Coming soon are Indiana Fiddlers’ Gathering (June 22 to 24), Dancing in the Streets (July 21) and Uptown Jazz & Blues Festival (Aug. 25).

Besides the Horizon Stage, Marquis, Market and Crossroads stages have roofs that stand at 20 feet at the highest point. This means audience members cannot get closer than 28 feet to the stage, or two average automobile lengths. The Tapawingo Stage will have barriers 23 feet away, Freeman said. That stage is owned by the Indiana Fiddlers’ Gathering.

The small, permanent band shell at Tapawingo Park is not covered by the new law.

At the Riehle Plaza depot, the Horizon Stage is about 10 feet at its highest point, meaning barriers will be set at 18 feet. The Horizon has a lineup of smaller groups and solo singer-songwriters.

The law means a lot of changes, but it’s all with safety in mind. How the barriers will affect traffic flow within the Taste grounds or if the crowd will react differently now that they cannot go to the stage and chat with their favorite local musicians will be determined Saturday.

Pat McClimans has played numerous Tastes as part of different bands, most recently Root Hog. On Saturday, the guitarist/vocalist will perform solo at 9 p.m. on the Horizon Stage after rocking out with Gypsy Revival at 5 p.m. on the Marquis Stage. He believes the barriers may not affect too many fans of live music.

“It seems like the way people move at the Taste, it’s not like they’re crowding the stage anyway,” McClimans said. “`I’m not sure how it will affect the atmosphere.”

Rarely is there a scene at the Taste where audiences are behaving like they’re seeing Guns N’ Roses in 1987. While fans do get close, some prefer to stand at a distance.

“In an open air setting, they tend to set back, which I don’t understand. It may be a sound thing,” McClimans said.

McClimans understands that safety is the main goal in the new law. The State Fair stage collapse on Aug. 13 in Indianapolis was a tragedy, but it’s one where the risk of a repeat can be reduced with new guidelines.

“Since we’re the first festival out, we just need to work through this,” Freeman said. “We all need to be working off the same playbook. All of the festivals need to be on the same playing field. Out of the gate, we’re trying to set the bar really high with where the new guidelines can be.”