Lawyers representing a disgraced egg industry magnate, his son and one of their company’s financial officers say their clients are potential targets of a criminal investigation into the 2010 salmonella outbreak that sickened thousands of Americans and led to a massive recall of their products.

In recent documents filed in a civil case in California, defense lawyers for Austin “Jack” DeCoster, son Peter DeCoster and Quality Egg Chief Financial Officer Patsy Larson say a federal grand jury has been meeting in Iowa to determine whether fraud or other crimes were committed in the production and testing of eggs.

Federal officials say at least 1,900 people fell ill – and likely thousands more – during the outbreak that started in July 2010 and was later linked to contaminated eggs supplied by Quality Egg and Hillandale Farms. Both companies voluntarily recalled 550 million eggs nationwide. 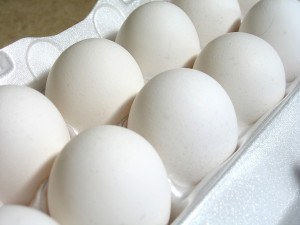 Regulators put most of the blame on Quality Egg, which did business as Wright County Egg, based in Galt, Iowa. Quality Egg, controlled by the DeCosters, sold chickens and feed to Hillandale and had more illnesses linked to its eggs. Inspectors discovered dead chickens, insects, rodents, towers of manure and other filthy conditions at both farms, and a congressional investigation found salmonella samples more than 400 times between 2008 and 2010.

Peter Deegan, a spokesman for the U.S. Attorney’s Office for the Northern District of Iowa, based in Cedar Rapids, said Wednesday he could not confirm the existence of the investigation. The office’s jurisdiction covers the rural area of northern Iowa where the farms are located.

The details of the ongoing criminal probe were filed as part of a civil lawsuit brought by NuCal Foods, a California cooperative that bought some of the tainted eggs. The lawsuit alleges Jack DeCoster and his companies knew that chicken houses and carcasses were contaminated with salmonella in the months before the outbreak based on their own testing, but kept that information from regulators and consumers and continued selling the eggs.

Citing the investigation, lawyers for the DeCosters and Larson said they would invoke their constitutional rights against self-incrimination if forced to testify. Last week, a magistrate judge put the testimony of Quality Egg on hold because those three key employees “are currently the target of a federal criminal investigation.”

Des Moines lawyer Jan Kramer said in a court filing that she and her partner have been retained to represent Jack DeCoster in the grand jury probe, of which he is “presently a target.” She said the case has been ongoing since Food and Drug Administration agents executed a search warrant at Quality Egg and DeCoster’s offices in Galt on Aug. 31, 2010, seizing documents related to the contamination of shell eggs.

“We would fully expect that once the investigation is completed, there will be no charges brought. But if there are, we will defend. We’re aware of nothing they have done that would warrant any kind of a charge,” Kramer said in a phone interview Wednesday.

R. Scott Rhinehart, a defense lawyer based in Sioux City, said in a May 11 letter that his firm has been retained to represent Larson, who has been subpoenaed to appear before the grand jury next week. He said he has been informed by prosecutors that “Patsy is a potential target in this investigation.”

West Des Moines lawyer F. Montgomery Brown said in a May 3 letter he has been retained to represent Peter DeCoster. He said his contact with prosecutors shows his client is “at minimum a `subject’ of the investigation understood as ‘fraud’ relating to the production and testing of eggs” at Hillandale Farms and Wright County Egg.

Brown said Wednesday his client has not been asked to testify in front of the grand jury, but denies criminal wrongdoing.

“Peter DeCoster denies any company he had involvement with knowingly transmitted (salmonella) contaminated eggs into the stream of commerce,” he said.

Rhinehart did not immediately return a message.

DeCoster, now in his late 70s, started building his vast egg production empire as a teenager in Maine. He became one of the nation’s largest producers, even as his operations were cited for immigration, safety, environmental and labor violations. His son, Peter, ran many of his companies’ day-to-day operations. The DeCosters said last year they have given up control of their egg operations in Iowa, Ohio and Maine.

Court documents filed by NuCal indicate what testimony grand jurors may have heard from Hofacre and Wasmund. Hofacre recommended a detailed plan of action to combat the presence of salmonella on the farms in May 2010, warning company officials in an email: “We have to get this level of SE (Salmonella Enteritidis, the bacteria linked to the outbreak) knocked down!”

Wasmund had earlier submitted several samples from a hatchery that supplied chickens to the Iowa egg operations for testing at a University of Minnesota laboratory, which found a different type of salmonella rampant in the facilities, according to NuCal’s complaint.

Brown said salmonella is routinely present at poultry farms, and the companies did the voluntary testing as part of their safety program.