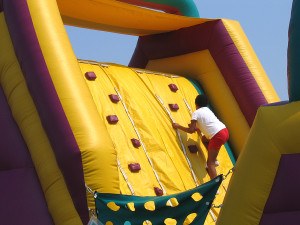 Last June, Moonwalks for Fun’s license to provide inflatable rides was suspended for two years because of a five-month gap in liability insurance coverage, but The Wichita Eagle reported it appears the company has continued to rent inflatables to city residents.

Pure Entertainment, an events venue, is allowed to have inflatables at its site, but the rides must be provided by a company licensed to operate in Wichita. The companies started calling customers Thursday evening after the newspaper reported they were being investigated by the city for possible ordinance violations.

Both companies are owned by Duane Zogleman and run on a day-to-day basis by his son, Jesse Zogleman.

In 2010, a 5-year-old Wichita boy died after falling from an inflatable ride and hitting his head on a concrete floor. The ride was provided by Moonwalks for Fun at Pure Entertainment. Late last year, the boy’s mother received a $435,000 settlement in a lawsuit she filed against Moonwalks for Fun.

An hour after the newspaper posted its story about the city’s investigation on its website Thursday, the Young family got a call from Moonwalks for Fun, saying their daughter’s 4th birthday party at Pure Entertainment would not include inflatable rides.

“My daughter had her heart set on going out there because her cousin had her party out there with inflatables about nine months ago,” Kasey Young said. “They offered to let us have a party there without inflatables for half off. We told them, ‘No way.’ ”

The Youngs rescheduled the party with another venue in Andover.

Thirteen companies are licensed to provide and operate inflatables in Wichita, but only five of those actually rent out the rides. Those five companies have told The Eagle that they don’t provide inflatables to Pure Entertainment.

Jesse Zogleman recently applied for a city license to provide inflatables under the company name of Jesse Zogleman Enterprises, and the application is being reviewed by the city’s law department. Duane Zogleman has denied having inflatables at Pure Entertainment.

“How can they say that?” asked Frank Pribyl, who said his family used the inflatables at Pure Entertainment during an open-bounce session on Feb. 4 and the next day while attending a Super Bowl party there. “I’ve been out there and seen them.”

Repeated calls by the newspaper to the Zoglemans, Pure Entertainment and Moonwalks for Fun on Friday were not returned.