As an auto mechanic, Lynn Austin admits he may be overly leery about the iffy cars he encounters while driving. 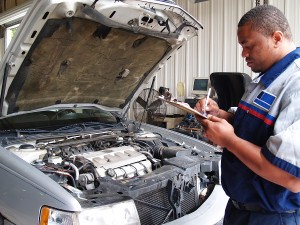 “It really would be nice to take some of the really bad junk off the road,” he said.

That’s why he favors what other states have but Minnesota doesn’t: mandated annual safety inspections of all vehicles. But he’d better not hold his breath waiting for that to happen, because in Minnesota political will is nil for that.

Rep. Tony Cornish, the chairman of the House Public Safety Committee, told The Free Press there has been virtually no interest in mandated inspections since the 1980s, when the state discontinued its emissions-only compulsory inspections in the seven-county metro area due to program expenses.

Indeed, costs are a reason – but not the only one – why fewer than 20 states still conduct mandatory annual safety inspections of private vehicles.

At one time 31 states were performing yearly inspections. But that was when states were more fiscally flush and programs received infusions of federal money.

But when states became cash-strapped, coupled with Congress’ decision to cease withholding highway construction funds to states without inspection regimens, the abandoning of programs proceeded.

North Carolina and other states dropped inspection programs because, they said, studies were inconclusive in determining whether cars with mechanical defects were a significant cause of accidents, or that safety inspections significantly reduced accident rates.

Other studies, however, have shown the opposite.

A research report commissioned by the state of Pennsylvania flatly concluded that safety inspections are effective and save lives.

A study in Missouri, where annual inspections are required, found that based on a recent year’s accident figures, one in 120 fatal crashes in Missouri involved a vehicle defect, compared to one in 84 in states without inspection programs.

Other states have dropped their programs simply because they cost too much, a rationale decried by Automotive Services Association federal lobbyist Bob Redding.

“It’s not a high state treasury outlay to do this,” said Redding, who advocates for mandatory state inspection legislation.

New Jersey, which dropped its program in 2010, saved $12 million a year by doing so, a comparative pittance in relation to the state’s overall budget.

Redding said the minor inconvenience to motorists of mandatory annual inspections pales beside their life-and-death dynamic.

He said without the required repairs mandated by an inspection, it’s too easy for motorists to blow off what needs to be done.

“They can be told, `Hey, your brakes are shot.’ But people don’t care. They say they can’t afford it – and they’re putting their lives and other people’s lives at risk.”

“The people who can least afford to take care of their cars are usually the people who are the most neglectful” of car maintenance, he said.

Bednar isn’t a proponent of mandatory annual inspections and the attendant fees motorists must pay.

“I tend to be kind of libertarian when it comes to stuff like this because it becomes a case of the few punishing the many: Why do I have to pay for someone else’s neglect?”

Moreover, Bednar thinks that Minnesotans on the whole are fairly diligent about taking care of their cars.

“For the most part, our vehicles are in pretty good shape,” he said.

Except when they aren’t. Fellow mechanic Austin has chilling tales about that.

He said a person came to him with a rustbucket car awhile back that Austin judged to be a clear and present danger because the bottom appeared ready to fall out of it.

He said the owner took the car to a junkyard, and that should have been the end of it.

“The junkyard sold it back to someone and it went back on the road,” he said.

In states requiring inspections, vehicles are assessed at designated sites, with owners of cars deemed faulty required to make the necessary repairs within a certain period of time. Failure to do so results in fines.

Rural Mankato resident Martin Costine said when he moved to the area from New Hampshire, which has annual vehicle inspections, he was taken aback by what he saw on streets and highways.

“I see a lot of cars here that would not be allowed on the road in New Hampshire … You wonder: How long away is that vehicle from losing a front wheel?”

Unsafe vehicles are not ordered to be parked in Minnesota, except in certain cases.

Austin said if a car’s tires are worn bald, an auto repair shop can call the State Patrol and that car will be taken off the road until the issue is remedied.

Aside from that, though, owners of vehicles that are barely roadworthy can operate them unfettered.

“We’ll find a bad vehicle with everything wrong,” Austin said. “And the guy says, ‘I’m not spending that much money on it’ and he drives away.”