The death of a 9-year-old Pomeranian from eating a dog treat is hardly “what nature intended,” according to a lawsuit filed this week. 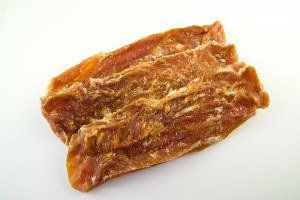 The federal lawsuit seeking class-action status was filed in Chicago o n Wednesday by Dennis Adkins, a resident of the Chicago suburb of Orland Park who owns a small trucking company.

He said that after buying the treats at a Wal-Mart store, he fed one each day from March 13 to 15 to Cleopatra, a 9-year-old Pomeranian, without changing the rest of her diet.

Cleopatra became ill and died on March 26 of kidney failure, the complaint said. Adkins’ other 9-year-old Pomeranian, Pharaoh, was not fed the treat and did not become ill, it added.

Adkins said he incurred more than $2,300 in damages, including the value of his dog and veterinary expenses.

Adkins said he did not know this, or see warnings on Waggin’ Train’s website until after Cleopatra became sick. He said Nestle Purina knew of more than 500 cases in which dogs became ill or died after eating chicken jerky treats imported from China.

“Who in their right mind would feed something to an animal that has an FDA warning?” Adkins said in a phone interview. “I would not buy the product.”

Daniel Edelman, a lawyer for Adkins, said he believes the lawsuit is the first of its type.

Nestle Purina spokesman Bill Salzman said: “We believe the claims made in the suit to be without merit and intend to vigorously defend ourselves. We can say that Waggin’ Train products continue to be safe to feed as directed.”

Wal-Mart requires suppliers to comply with pet food safety regulations, spokesman Greg Rossiter said. “We go further than other U.S. retailers in requiring our suppliers of pet food and treats to gain the same level of food safety certification required of our human food suppliers,” he added.

The lawsuit seeks class-action status on behalf of people who bought the treats or similar products, or own dogs that consumed them and became ill. It seeks compensatory and punitive damages and a halt to the sale of the treats.

“Wal-Mart is the world’s No. 1 retailer,” Adkins said. “If Wal-Mart can’t step up to the plate and say the product has a question mark about it, and take it down, then who’s going to?”

Nestle Purina is based in St. Louis and is a unit of Switzerland’s Nestle SA. Wal-Mart in based in Bentonville, Arkansas.