Sedgwick County officials say damages could be as high as $283 million after a tornado hit the southeast part of Wichita, Kansas. 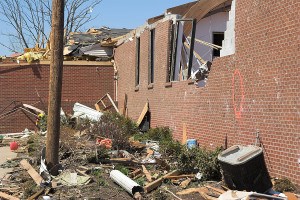 The storm that struck late Saturday night caused damage to a mobile home park and McConnell Air Force Base. A Boeing Co. spokesman says the Wichita plant took a “direct hit.” Emergency management officials said that at nearby Spirit AeroSystems, most buildings were damaged. Flash flooding and fires also were reported.

Sedgwick County was one about a dozen counties where homes were damaged or destroyed from a powerful storm system that generated numerous tornadoes.

Kansas Emergency Management spokeswoman Sharon Watson said that in Rice County, inmates had to be transferred after the jail was damaged. And downed power lines closed roads and highways in several central and western counties.