As floods and tornadoes wreaked havoc last year, the Missouri National Guard spent $117,100 so Gov. Jay Nixon and members of his administration could get a birds-eye view of the damage from military aircraft, according to records obtained by The Associated Press.

Taxpayers will foot the bill, but the cost may not all come from the state treasury. The National Guard has asked the Federal Emergency Management Agency to cover 75 percent of the tab. 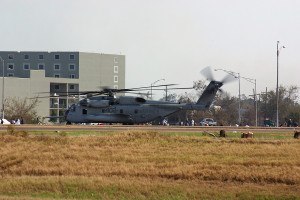 Records recently provided to AP show Nixon took about 10 helicopter flights between April and July – initially to survey flooding in southeast Missouri and along the Mississippi River, then to view damage from the Joplin tornado, and finally to observe flooding along the Missouri River and in northwest Missouri. In many cases, Nixon was not alone. Flight logs show he often was accompanied by members of his administration and – in some cases – by other statewide executive officials, state lawmakers, local officials and media.

Nixon’s administration did not address the cost of the National Guard flights but instead said the Guard played an essential role in the disasters.

“Being prepared and responding in a rapid and coordinated manner helped us manage the response in both tornadoes and floods,” Nixon spokesman Scott Holste said in an emailed statement. “The governor will continue to use those assets as needed in future disasters. That’s why we have the National Guard.”

In the past, lawmakers have leveled bipartisan criticism at Nixon for charging the cost of his flights to other state agencies. In an attempt to halt that, lawmakers allotted the governor’s office an extra $200,000 for travel and included wording in the current budget prohibiting most agencies from paying for the travel and staffing costs of Missouri’s executive officials.

Most of Nixon’s trips on National Guard helicopters occurred before that budget took effect July 1. But even under the new restrictions, it would have been fine for the National Guard to pick up the cost. That’s because the budget contains an exception for the Department of Public Safety, which includes the National Guard, to pay for flights by the governor and other statewide officeholders.

“Obviously, no one is going to criticize the governor visiting disaster areas,” said House Budget Committee Chairman Ryan Silvey, R-Kansas City. “I don’t know whether they were all appropriate or not, but I would give him the benefit of the doubt.”

The Associated Press filed open-records request in early October with the National Guard, the state Office of Administration, the Missouri State Highway Patrol and the Department of Conservation seeking details about flights taken on state aircraft by government officials and employees, excluding those for law enforcement purposes. Three of the state agencies provided the information within weeks, and their records show that Nixon had complied with the new budget requirements by charging flights either to his office or the Department of Public Safety.

But despite repeated inquires by the AP, the National Guard did not provide the flight information until mid-February – more than four months after the original request. The information was provided only after the AP filed an additional open-records request seeking details about the Guard’s policies, procedures and personnel involved in handling requests under the federal Freedom of Information Act.

Master Sgt. Herman “Lee” Offenburger, who is in charge of handling open-records requests, apologized for the delay while explaining that it took a while to pull together the list of passengers on the flights. He said the Missouri National Guard has no regulatory requirement to maintain passenger manifests.