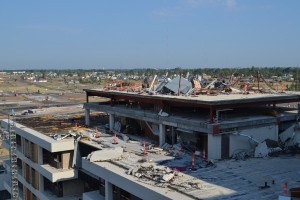 Many Joplin residents either ignored or were slow to react to the first warning sirens about a massive and deadly tornado this spring, partially because of years of false alarms, the government said Tuesday.

In assessing the communications and warning systems used before and during the storm that killed 162 people, the National Oceanic and Atmospheric Administration said many people waited for additional information like seeing the tornado or a television or radio report about the urgency of the threat.

“The majority of surveyed Joplin residents did not immediately go to shelter upon hearing the initial warning,” the report said, adding that those people “did not take protective action until processing additional credible confirmation of the threat and its magnitude from a non-routine, extraordinary risk trigger.”

A “vast majority” of Joplin residents didn’t respond to the first siren because of an apparent widespread disregard for tornado sirens, according to the report.

Richard Wagenmaker, a National Weather Service meteorologist in Detroit and leader of the assessment team, said it was unclear if the slow public response cost lives.

“It’s really hard to tell how many people that perished in the tornado did not take shelter,” Wagenmaker said during a conference call. “It was a very large tornado, so there were certainly a number of people who did all the right things, took shelter in the best available place, but still found themselves in situations that weren’t survivable. So it’s really hard to make that assessment.”

The report also said the National Weather Service was overall well-prepared and “performed in an exemplary manner” and that the combined efforts from the weather service, emergency management and the public “saved many lives.”

But there were also lessons to be learned, including beefing up the wording in tornado warnings, the report said. After the intensity of the storm was clear, the resulting warnings weren’t worded strongly enough “to accurately portray that immediate action was necessary to save lives.”

Instead, the tornado warnings issued were the “basic template,” Wagenmaker said.

“Once there became an awareness that something big was going on, we wanted the severe weather statements and warnings to project a heightened sense of urgency,” he said. The warnings should have said “something along the lines of ‘This is a very large and dangerous tornado and don’t mess around,’ basically.”

The report said the weather service was considering developing other forms of notifications including GPS-based communications involving text messages, smart phone apps and upgrades to the Emergency Alert System and NOAA Weather Radio.

NOAA also said the agency wanted more collaboration between what it calls the “weather enterprise,” which includes the weather service, media and emergency management, in order to make warning systems consistently better at conveying the seriousness of a threat.

“We have for years … promoted weather radios and shelter in place,” he said.

He said the city has applied for federal funding 10,000 weather radios for Joplin households and for 4,000 in-place shelters for Joplin residents. The NWS assessment should illustrate the need for those resources, Stammer said.

The NWS team interviewed about 100 people, including residents, emergency responders and city officials, and also examined warning and forecast services before the powerful tornado cut through the southwest Missouri city of about 50,000 residents and reduced much of Joplin’s southern half to ruins.

Several people interviewed said they would like to see different siren tones for varying levels of emergencies, the report said.

Lynn Maximuk, director of the National Weather Service’s central region, pointed out that the siren systems are not run by the weather service but by emergency management departments.

“We’re trying to improve our services from the weather service and how we communicate the threat information to better serve the other parts of the weather enterprise, whether they be the media or emergency management or the private meteorological community to try to help them develop a better way to make our nation weather-ready,” Maximuk said.

Cleanup, recovery and rebuilding continue in Joplin. Four schools were destroyed and six other district buildings were damaged. Entire neighborhoods were leveled, as was much of the city’s main commercial district.

Glenn Coltharp, dean of education at Missouri Southern State University in Joplin, said tornado sirens can’t be heard at his home in a rural area about 20 miles north of Joplin. He said he monitored the tornado on his weather radio and on television.

He said many residents he spoke to after the storm told him they heard the sirens and took cover.

“I think most people did hear it, and they took it seriously,” he said. “That would be my assessment.”

Cyberattack on US Pipeline Is Linked to Criminal Gang