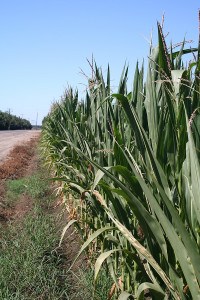 Tall stalks obstructing drivers’ views are a fall hazard in the Corn Belt, but the danger could be greater as farmers seek to cash in on higher prices by expanding their fields closer to the edge of roads.

With corn commanding twice what it did last year, farmers from Pennsylvania to the Dakotas have tried to plant as much as possible. The federal government has estimated this year’s planting at 92.2 million acres, up 5 percent from last year.

In some cases, that means farmers have planted right up to the gravel in remote areas, a practice that can have deadly consequences at unmarked intersections. A Nebraska man was killed last week when a pickup truck struck the four-wheeler he was driving on a rural road near his home.

“You wouldn’t be able to see him coming,” the sheriff said.

Chad Siebert, of Colorado Springs, Colo., said his father’s death was an unfortunate accident and he didn’t blame anyone. He said his father had driven the roads around his home for 40 years and the visibility at the intersection wasn’t any worse than usual this time of year.

“From what I understand, my father slowed down, looked one way and I’m guessing as he looked the other way he was kind of rolling through and taking off and the unexpected happened,” Chad Siebert said.

His father used to hire kids to cut down corn near intersections to improve visibility, he said. But he understands why some farmers might plant closer to the road.

“Those corners used to all be open when prices were terrible, but they’re worse now with corn prices being good,” Siebert said.

Radcliff said the problem is more worrisome now that more people are on the roads.

“This time of year, they are going to start harvesting so there are a lot more trucks and equipment and the kids are back in school so a lot of rural kids are traveling on those roads,” the sheriff said.

Officials in neighboring Iowa, the top corn-growing state, said they also were concerned about visibility. Twenty-eight people have died since 2001 at rural intersections where vision was obstructed, according to the Iowa Department of Transportation.

The department’s data doesn’t differentiate between tall corn and other vegetation, but IDOT spokesman Dena Gray-Fisher said the crashes tend to occur in the late summer and early fall when corn is high.

“Drivers need to be aware, and they have to slow down and stop and proceed with caution,” said Doug Miller, the county engineer in Kossuth County, which includes 1,600 miles of roads around Algona.

Illinois and Indiana don’t track accidents where tall corn was a factor, but Indiana officials said visibility problems have become more common as more corn is planted. State crews have cut corn in some spots where it was planted in the right-of-way – the area between the farmer’s field and the road.

Nebraska officials said 24 people have died in obstructed vision accidents since 2002, not including the accident that killed Steven Siebert last week.

With fences becoming less common, farmers don’t always know where property lines are, Gray-Fisher said. And, farmers are using larger equipment that needs more space to turn and is more likely to cross over into right-of-ways.

“We definitely have a problem and we try to stake it out, show the producer where the road right-of-way is and inform then they’re not supposed to farm there and when they do it creates an obstruction for motorists,” said Miller, the county engineer.

Once farmers are aware of the problem, they usually don’t plant in the right-of-way again, he said.

Corn farmer Bruce Rowher, 59, said farmers can plant too close to the road in an effort to “maximize a person’s return.”

“Not having as much livestock as we used to, fences are deteriorating and tend to be removed,” said Rowher, who lives near Paullina in northwest Iowa. “If nothing is marking the boundary anymore, to maximize production and keep weeds under control, it’s a tendency that does happen.”

But he also downplayed the issue, saying it’s infrequent and farmers fix the problem when they learn they’ve encroached on a right-of-way.

Radcliff said he’d like to see farmers stop planting about 100 feet from corners to give drivers time to react, but Kossuth County Sheriff Steve Kollasch said he thought that would be a hard sell. He advocated more stop and yield signs.

Rowher suggested drivers use common sense and just “treat every intersection as if it has a stop sign.”

“If the corn is high,” he said, “you’re not going to be able to cast your eye out and see a half-mile down the road.”