Tropical Storm Zeta gathered strength as it bore down on the Mexican cities of, where it was forecast to dump heavy rain before turning north to threaten the U.S. Gulf Coast from Louisiana to Mississippi with another direct hit.

Zeta was churning southeast of the Yucatan and getting more powerful as it moved over warm waters, the U.S. National Hurricane Center said Monday. The storm will likely arrive at the Mexican resort towns as a Category 1 hurricane early Tuesday, pummeling a region that suffered widespread flooding from Hurricane Delta only weeks ago. As much as 8 inches (20 centimeters) of rain could fall across the Yucatan, parts of Cuba and even into Florida as Zeta moves north.

“Zeta is forecast to become a hurricane this morning, and continued strengthening is likely until Zeta moves over the Yucatan peninsula this evening,” Dan Brown, a meteorologist at the center, wrote in his forecast. “Zeta is forecast to be at or near hurricane strength when it approaches the northern Gulf Coast on Wednesday, and there is an increasing risk of storm surge, rainfall, and wind impacts from Louisiana to the Florida Panhandle.”

Zeta is the 27th named storm in a supercharged Atlantic hurricane season, just one short of the record reached in 2005, when Hurricane Katrina devastated New Orleans. So many storms have formed this year that the hurricane center has run out of official names and is using Greek letters to designate systems. 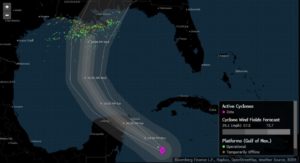 The U.S. has been particularly hard hit, with Hurricanes Isaias, Laura, Hanna, Sally and Delta all hammering the coastline, causing billions of dollars in damage. A handful of tropical storms have struck the U.S. as well. Zeta would be the record 11th storm to come ashore in the contiguous U.S. this year, and if it makes landfall in Louisiana, it will be the fifth time that state has been hit this season.

Chevron Corp. and BHP Group Ltd. have already begun pulling non-essential personnel off oil and gas platforms in the Gulf, where Zeta is expected to become a Category 1 hurricane before making landfall Wednesday. Noble Corp. moved its Globetrotter II rig out of the way, while Equinor ASA plans to shut production at its Titan platform.

The disruptions will likely be short lived because Zeta is moving quickly and should be on land by late Wednesday, said Matt Rogers, president of Commodity Weather Group LLC.

Zeta will approach the Gulf Coast as Category 1 hurricane, but cooler water and wind shear, which tears at its structure, will likely keep it from strengthening and could even weaken it, said Elizabeth Palumbi, a meteorologist with commercial forecaster Maxar.

While some storms, including Isaias and Fay, hit the East Coast, the majority of systems struck the Gulf Coast between Texas and Florida. That includes Hurricanes Laura and Delta, which both came ashore near Cameron, Louisiana, providing a double-dose of misery for residents in the western part of the state.

A typical Atlantic hurricane season only spins up 12 storms. The six-month season theoretically ends on Nov. 30, but a number of storms formed before its official start date of June 1 this year, and some meteorologists think they could keep coming into December.

–With assistance from Sheela Tobben and David Wethe.