The oil cleanup from a leaking cargo ship that ran aground off the coast of Mauritius continues while the government and insurance firms begin probing liability for the accident.

The incident has befouled the white-sand beaches of the Mauritian coast and left the Indian Ocean island nation facing widespread pollution. Its economy, which relies heavily on tourism, is already reeling from the coronavirus fallout and may be further affected by the spill.

The 300-meter-long vessel Wakashio was en route to Brazil from China when it ran aground off the southeastern coast of the island of Mauritius on July 25. One of its five fuel oil tanks, holding about 1,180 tons, ruptured last week, resulting in more than 1,000 tons of fuel leaking into the ocean. As of Tuesday, roughly 460 tons have been manually recovered from the sea and coast, according to Mitsui O.S.K. Lines Ltd., which chartered the vessel. 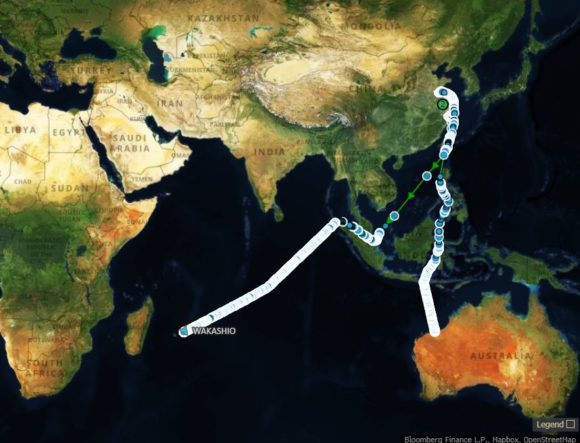 Japan P&I Club, which provided insurance for the ship’s owner, Nagashiki Shipping Co., said Tuesday that it’s investigating the extent of its coverage. The insurance will cover removal of the ship, as well as cleanup and other legal liabilities related to the owner, according to Japan P&I spokesman Koichi Miyahiro.

Mitsui O.S.K. Lines may be ordered by a local court to pay for environmental damages, said Tokai Tokyo Securities analyst Kenji Kanai. However, as a shipping insurance may cover these potential damages, “an impact on Mitsui OSK would not be big,” Kanai added. MOL, as the company is known, closed down 1% in Tokyo on Tuesday.

Japan’s Nagashiki Shipping, the ship’s owner, said Monday that the transfer of oil to a nearby tanker is underway. Mauritian authorities have ordered two tankers — MT Elise and MT Tresta Star — and tugboats to assist with the removal of the fuel oil from the Wakashio, the Japanese company said. Japan said on Sunday it will send a six-person disaster relief team to assist with the oil leak.

Wakashio was carrying 3,894 metric tons of low-sulfur fuel oil, 207 tons of diesel and 90 tons of lubricant oil. There’s still about 1,800 tons of fuel on board, MOL said Tuesday. The ship, known as a capesize vessel designed to transport dry bulk cargoes such as iron ore, was not carrying a cargo.

While the ship has stopped leaking, the government has planned for “a worst case scenario,”Mauritius Prime Minister Pravind Kumar Jugnauth said Monday. 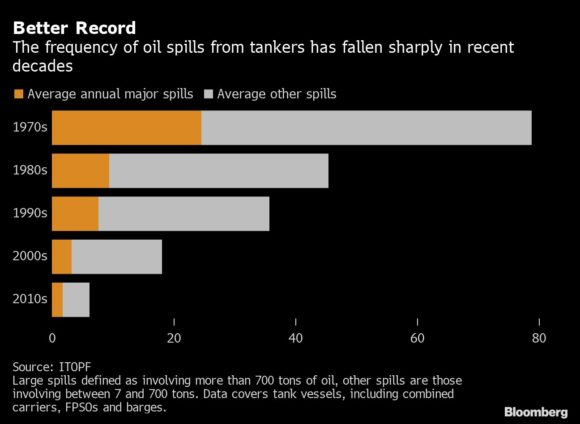 “The vessel is breaking up. That’s for sure,” he said. “We are very concerned with the fact that in the lapse of time that we have before it breaks up, we will need to pump all the oil.”

Large oil spills by tankers involving the release of more than 700 tons of fuel are becoming less frequent, averaging less than two a year since 2010, according to ITOPF, a shipowner industry group which acts as an adviser on clean-up operations and maintains data on incidents. The frequency of all spills of 7 tons or more of oil is also declining, down from an average of about 79 a year in the 1970s to less than 6 in the last decade.

Mauritian lawmakers are set to discuss the matter in parliament Tuesday, with the Minister of Blue Economy, Marine Resources, Fisheries, and Shipping expected to explain the measures that were taken immediately after the vessel ran aground.

Wakashio left Australia’s main iron ore shipping point of Port Hedland in early-June, and dropped off shipments at two Chinese ports, according to ship-tracking data compiled by Bloomberg. The ship departed China on July 4, refueled in Singapore around July 14 and was on its way to Brazil before running aground about 1 mile off the coast of Mauritius.

–With assistance from David Stringer.