Neal helped turn around the insurer over his tenure, but in recent months became mired in scandal over an affair with his secretary that was not properly disclosed as part of QBE’s code of conduct.

Regan will succeed Neal on January 1, 2018. Regan will remain on the board as an executive director.

The company said it has undertaken a “detailed succession planning process over the last two years, and has carried out an internal and external candidate review process for this appointment.”

Neal began with the company in QBE’s European Operations in 2003 and moved to Sydney in 2011 as CEO, Global Underwriting Operations. He was appointed to the role of Group CEO in 2012, replacing long-time Group CEO Frank O’Halloran.

As Group CEO, Neal embarked on a successful turnaround strategy for the insurer, which had been dealing with write-downs in North America and rising claims in Latin America. He changed the management team, including bringing on Pat Regan, and led efforts to improve underwriting standards, sell non-core businesses, raise capital and improve reserving.

In 2014, QBE returned to profitability on improved North American results.

“On behalf of the Board, I would like to sincerely thank John Neal for his dedication and leadership of QBE over the last five years. John has led the business through a significant transformation and a challenging period in the insurance industry globally and has been working closely with the Board to ensure a smooth transition for his succession,” QBE Group Chairman Marty Becker said in prepared remarks.

The announcement of Neal’s departure comes seven months after the board decided to dock Neal’s 2016 bonus by 20 percent, or A$550,000 (US$422,444), as reported by Carrier Management. Neal had been involved in a personal relationship with his secretary but failed to report it immediately to the board of directors, which is required by QBE’s code of conduct.

“The code of conduct is very clear in the expectations it sets. The board felt I was not completely in compliance with that code of conduct and hence the decision was taken to cut an amount of my STI [short-term incentive],” Neal acknowledged during a press conference in February called to highlight what were strong financial results for QBE in 2016.

The company’s 2016 annual report included this statement: “The group CEO has had a commendable year and delivered a strong full-year result for QBE. His performance is well regarded by the board. However, both parties agree some recent personal decisions by the CEO have been inconsistent with the board’s expectations. Therefore, the board has decided that his 2016 STI will be reduced by 20 percent [to A$2,210,117, or US$1.7 million].

His total remuneration for 2016, even with the reduced STI, was just over A$3 million [US$2.3 million].
Regan Bio 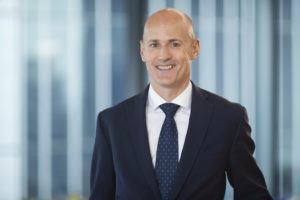 “In the last 12 months Pat has led a strong turnaround in the Australian & New Zealand Operations highlighting his operational skills and business acumen and, in his previous role as Group Chief Financial Officer, had been pivotal in stabilising the balance sheet and enhancing the Group’s capital management,” said Becker.

In an interview with Insurance Journal’s L.S. Howard in June, 2016, Regan talked about why he left Aviva to take on the job as CFO at QBE. Regan said he took the job at QBE in 2014 because “it felt like there was something we could create that was different and distinctive.” He had also been involved in a major transformation project at Aviva.

He also discussed his management style. Rather than micromanaging, he lets his team of professionals around the globe do what they do best because they “know how to do their jobs 100 times better than I could.” While he makes sure they’re on track and have the help they need, he lets them fulfill their goals without hand holding.”