The Mark Provincial Sword of Kent, an important ceremonial sword belonging to the Provincial Grand Lodge of Mark Master Masons of Kent, has been recovered from an auction house in London. 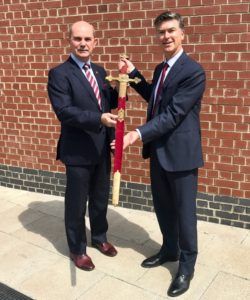 The sword was stolen from a Provincial Officer during a brazen home invasion in March 2016 while the occupants were asleep. Opportunistic thieves initially targeted the keys to two vehicles, one of which contained the sword, awaiting transportation back to its home in Whitstable.

One of the vehicles was recovered but the contents had never been located until this June when a researcher from the Masonic Library and Museum in Norfolk spotted the sword being offered for sale at a London based auction house specializing in the sale of antique arms, armor and military items.

The Mark Province of Kent contacted their insurance company, who in turn reached out to Art Recovery International (ARI), an organization that specializes in recovering stolen and looted works of art. ARI took the case on a pro-bono basis. With the aid of the Metropolitan Police Service (Bromley Borough), an unconditional surrender of the sword was negotiated with the dealer who had consigned the sword for sale.

When questioned, the dealer recalled purchasing the sword at a car boot sale in Ford, West Sussex, but neglected to retain the license plate number of the car offering the lot.

No arrests have been made.

The ornately carved and bespoke Masonic swords are valuable among collectors and often uniquely inscribed with their provenance. ARI is disappointed with the level of due diligence performed by the art trade prior to selling objects in their galleries or sales rooms.

“A cursory internet search reveals a 2016 posting about this theft. I urge the art market to get with the program and search stolen art databases such as the non-profit Artive Database (artive.org) before accepting works for sale. It is imperative, as well, that victims of crime report their losses to these databases for the due diligence process to work effectively,” said Art Recovery’s Christopher Marinello.