Large shipping losses have declined by 50 percent over the past decade, mostly driven by the development of a more robust safety environment by ship owners, according to Allianz Global Corporate & Specialty SE’s (AGCS) fifth annual Safety & Shipping Review 2017. There were 85 total shipping losses reported in 2016, down 16 percent compared with a year earlier (101). The number of shipping incidents (casualties) declined slightly year-on-year by 4 percent with 2,611 reported, according to the review, which analyzes reported shipping losses over 100 gross tons.

More than a quarter of shipping losses in 2016 (23) occurred in the South China, Indochina, Indonesia and Philippines region – the top hotspot for the last decade. Loss activity there remained stable but was still almost double the East Mediterranean and Black Sea region (12), which was the next highest. Loss activity was also up in Japan, Korea and North China; the East African Coast, the South Atlantic, the East Coast of South America as well as the Canadian Arctic and Alaska maritime regions.

Cargo vessels (30) accounted for more than a third of all vessels lost. Passenger ferry losses increased slightly (8), driven by activity in the Mediterranean and South East Asia. Standards remain an issue in some parts of Asia with bad weather, poor maintenance, weak enforcement of regulations and overcrowding contributing to loss activity. 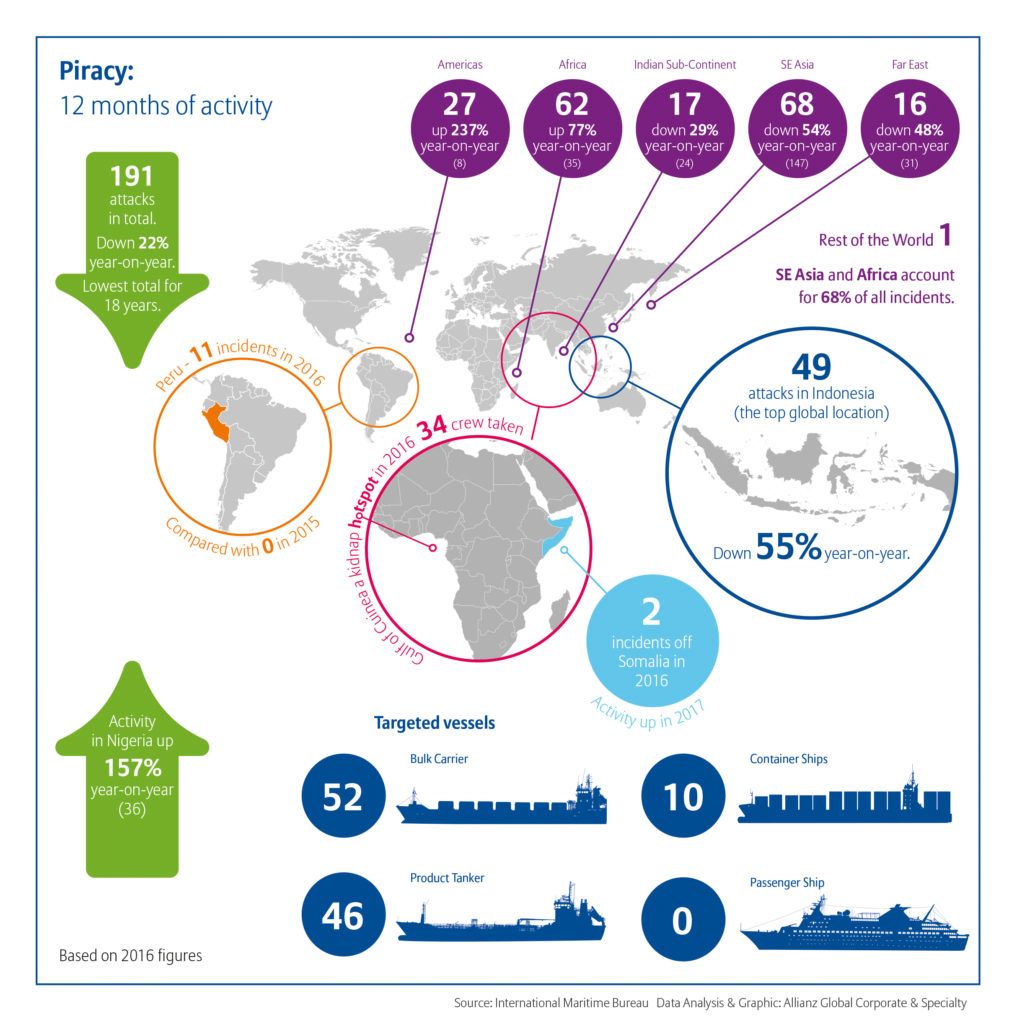 The most common cause of global shipping losses remains foundering (sinking), accounting for more than half of all losses in 2016, with bad weather often a factor. Over a third of shipping casualties were caused by machinery damage, which was also responsible for driving a 16 percent uptick in incidents in the East Mediterranean & Black Sea region (563), enough for it to replace the British Isles as the top incident location over the past decade.

Safety-enhancing technology is already impacting shipping – from electronic navigational tools to shore-based monitoring of machinery and crew welfare. Technology has the potential to significantly reduce both the impact of human error – which AGCS analysis shows accounted for approximately 75 percent of the value of almost 15,000 marine liability insurance claims over five years, equivalent to more than $1.6 billion – as well as machinery breakdown.

Additionally, technology is instrumental in assisting with offshore crew health problems, which can often be difficult to address due to location. AGCS, together with Allianz Worldwide Care and Allianz Global Assistance, is now offering crew 24/7 access to medical advice through a dedicated app and on-board equipment. Such innovative “telemedicine” assistance services can help vessels make more informed decisions about a crew member’s health, potentially reducing the need to make costly route deviations.

The threat of cyber attacks continues to be significant. Most attacks to date have been aimed at breaching corporate security rather than taking control of a vessel. As no major incident resulting from a cyber attack has taken place, many in the industry are complacent. “However, IT security should not be put on the backburner – if hackers were able to take control of a large container ship on a strategic route, significant economic losses would occur,” added Kinsey.

The technology behind autonomous vessels is developing rapidly, including technology that could allow ships to be controlled remotely or operate autonomously. Advancements in technology are also expected to enable ships to monitor their own health and the environment around them.

“Autonomous technology has the potential to revolutionize the movement of cargo on a scale not seen since containerization was introduced some 50 years ago,” says Kinsey. “Despite unknowns and regulatory issues, autonomous shipping will happen. Economic pressures on the shipping industry and the need to find efficiencies will support and speed up developments in maritime automation.”

Piracy Threat Evolves with Crew Kidnapping on the Rise

According to the International Maritime Bureau (IMB), incidents of piracy in 2016 continued their downward trend. The bureau recorded 191 incidences of piracy in 2016, down 22 percent from 2015 (246) and the lowest total recorded since 1998. The reduction reflects the success of measures to contain the threat of Somali pirates in the Gulf of Aden and Indian Ocean, including the introduction of armed guards on-board vessels and the presence of a multinational naval task force. There were just two recorded incidents off Somalia in 2016, compared with 160 in 2011.

Despite this positive trend, the threat of Somali pirates has not gone away. In March 2017, pirates captured the oil tanker, Aris 13 off the coast of Somalia and demanded a ransom – the first such seizure of a large commercial vessel since 2012. Then, on June 1, 2017, armed pirates attempted to board the tanker MT NAVIG8 PROVIDENCE in the Gulf of Oman.

2016 also saw the escalation of crew kidnapping, showing a threefold increase on 2015, according to the IMB. Pirates kidnapped 62 people for ransom in 15 separate incidents during the year. Just over half were captured off West Africa, while 28 were kidnapped from areas around Malaysia and Indonesia.

The collapse of one of the world’s largest shipping companies, Hanjin Shipping, over the past year exposed the perilous state of some parts of the sector. Bankruptcies are rising and when debt levels are high and earnings low, ship owners often seek to make cost savings from maintenance budgets, training and crewing levels, all of which can spike loss activity.

According to AGCS, negligence/poor maintenance is already one of the top causes of liability loss in the shipping sector and an increase in maintenance-related claims is observed. Implementing rigorous inspection and maintenance regimes is crucial.