Services are vulnerable to disruptions from both hot and cold weather, with the speed of ambulance response beginning to suffer when the mean daily air temperature drops below 2°C or rises above 20°C. This is thanks, largely, to more emergency calls past these thresholds.

Researchers at the University of Birmingham recommend that bespoke weather forecasts are built into ambulance service prediction models. This would allow managers to better predict call-out rates to improve ambulance operations and also reduce air pollution from idling vehicles on urban streets.

Current daily estimates at the London Ambulance Service (LAS) of vehicles likely to be required in the week ahead are based on statistics for the same days of the year over the last three years. However, the weather is rarely the same on a particular day, or week, from year to year.

Researchers in the University’s Ambulance Atmospheric Impact Research’ team (AAIR) produced the study, which is being presented today (24th) at the General Assembly of the European Geosciences Union, in Vienna.

“The weather impacts directly on day-to-day ambulance operations, whilst the climate contributes to the number of staff and vehicles required, said the lead author Dr, Francis Pope, from the University of Birmingham’s School of Geography, Earth and Environmental Sciences. “We recommend further research to allow ambulance planners to incorporate bespoke weather forecasts into planning systems, as there is evidence that heatwaves and coldwaves could increasingly cause increased demand and ambulance response time delays.” 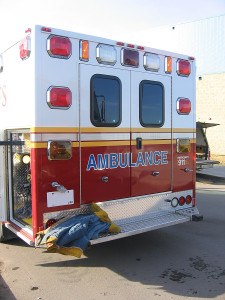 Ambulance services operate 24 hours-a-day around most of the world. In England, more than nine million emergency calls were received in 2014/15. The study shows that response times worsen more rapidly at lower temperatures because of ice and snow on the roads.

The LAS uses the Advanced Medical Priority Dispatch System (AMPDS) to assess the patient’s main complaint or injury. Life threatening complaints have a target response time of eight minutes or less and 75% of these ‘Category A’ complaint types must be answered within the target time.

Research shows that, as the temperature drops below 2°C or rises above 20°C, the total ambulance call-out volume increases and the percentage of responses within the eight-minute target time reduces.

A 20% increase in daily call-outs, compared to the average, leads to a decrease in performance (% response in eight minutes) of 14.4% and 8.2% for temperatures below 2°C or above 20°C.