Unusually warm weather in the Arctic is helping shift weather patterns this year from North America to the Middle East, after global warming shattered records in 2016, according to the World Meteorological Organization.

Average sea-surface temperatures hit their highest levels ever last year, and overall temperatures over sea and land were 1.1 degrees Celsius above the pre-industrial period. At least three times this winter, the Arctic has experienced the polar equivalent of a heat wave with Atlantic storms driving warm, moist air.

The confirmation that 2016 was the warmest year on record comes as U.S. President Donald Trump pushes to dismantle programs to combat climate change. Last week, the Republican called for relaxing fuel-economy standards for cars and trucks, which along with other vehicles are the U.S.’s largest source of greenhouse gases. Trump also released a budget with sweeping cuts to climate change research and grants for clean energy development. 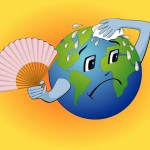 The global warming trend is continuing into 2017. In the U.S., 11,743 warm temperature records were broken or tied in February, according to the U.S. National Oceanic and Atmospheric Administration. Provisional data indicates that the rising rate of carbon dioxide in the atmosphere has not eased, the WMO said.