Reporting to the U.S. President & Chief Operating Officer Jim Buckley, Daniel will deliver on his proven success of driving growth and cultivating strong relationships with carriers and other key clients. He will oversee the core loss adjusting division while also directing strategic accounts and executing sales strategies to sustain Cunningham Lindsey’s continued growth.

Daniel will be based in Dallas, Texas.

Everest Re Group, Ltd. named Megan Watt head of Claims Operation for Everest Insurance. Located in Liberty Corner, N.J., Watt will oversee all aspects of the Insurance Claims Operations and will report directly to Jonathan Zaffino, president of the North America Insurance Division.

Watt joins Everest from AIG, where she worked since 2000, having held a variety of roles of increasing responsibility within the AIG claims organization, most recently as head of Complex Casualty Claims for AIG Property & Casualty. From 1990 to 2000 she pursued her legal career as a litigation associate at various firms each specializing in insurance litigation, and ultimately became partner at the law firm of Bollinger, Ruberry & Garvey. While there she handled a variety of coverage issues, litigation strategies and ensuing litigation, including any necessary appellate work. She is a member of the N.Y., N.J., Washington D.C. and Illinois Bar Associations.

Swiss Re Corporate Solutions announced the appointment of Jim George to the role of Global Head Claims. George will lead the global claims organization and serve as a member of Corporate Solutions’ Management and Business Management Committees. He succeeds Nicola Parton, who is now head Primary Lead Strategy & Client Engagement. 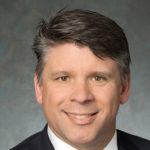 Since 1995, George has held a variety of claims management and leadership positions with Swiss Re Corporate Solutions, and formerly GE Insurance Solutions. Most recently, he served as head North America Claims. He was instrumental in creating the Corporate Solutions Claims Commitment, which is now an integral part of the company’s value proposition.

George is a licensed attorney who previously practiced law in Kansas City, Missouri. He received his JD from Indiana University, School of Law.